Women in Iran cast off their hijabs and occupy the streets.

Looking at these women in this photo, I think of what feelings they struggle with at this moment. 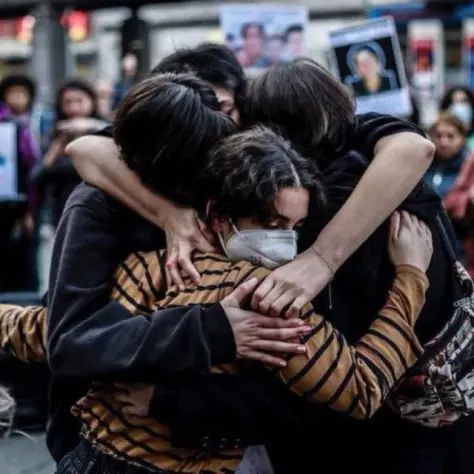 How many emotions populate this picture? Courage, triumph, feelings of being exposed, fear, the sense of a point of no-return being crossed…

But one knows they have found the one thing that will carry them beyond this moment—the long, deep embrace of sisterhood.

Inquilab Zindabad is not only said with clenched fists, it’s said with interlinked arms and bodies curved into each other.

A few years ago, my sister Sonia and I went for a short holiday to Iran. A country of great natural beauty, breathtaking mosques and caravaranserais and public baths and walled gardens, lavish hospitality, astounding food, and of course a culture that we from North India found to be familiar. But the most important memory of our holiday that I like to recount is our hushed conversations about the hijab. An Iranian friend had arranged our trip for us, so basically all the exertion we had to do was to get into the cars and hotels that were booked for us. Sightseeing was also taken care of—foreigners we were told could not visit the sights unaccompanied; therefore, tour guides were booked for us in every place we visited.

All of these guides were young women, articulate and confident. Each one wore the hijab and never took it off in front of us. I was always the one to start that particular conversation, because our visit was just a few months following the awe-inspiring protests (2017) in which scores of women—the Women of Enghelaab (Revolution) Street—began taking off their hijabs in public places across Iran. The protests had been put down by the time we arrived; in fact no one knew where the protestors had been incarcerated, or indeed what happened to them. All our guides and in fact all the women I spoke to on our travels, had looked for news of them using VPNs on the international media—one said she knew one the women had made it out of Iran, another believed that the same woman was dead.

I wanted to know what our guides, and other women thought, and whether fear of the state would have lead them to repudiate the protestors. In every conversation, however, there was only quiet support for the right of these women to choose initially, and then more explicit assertions that the Mollah (lovely Persian English is economical with the use of plural morphology; in this case it is perfect because really the theocratic state is a unique multicellular organism) cannot impose it upon any woman. The strong undercurrent of this opinion was such that the Mollah was bringing out wall posters targeting the women of Enghelab Street as stooges of western imperialism.

None of the women who expressed their tacit or active support for the women of Revolution Street connected either imposition or lack thereof to their belief in Islam. It never even struck them that the debate could be about Islam—rather, the assertion was of a right to do differently from what the (theocratic) state of Iran ordained. The hijab directive was, I grew to understand, a symbol for the brutal exercise of power that has resulted in a loss of civil liberties and the right to autonomy over one’s own person. Perhaps that is why so many men have joined the protests these days.

We are fond, in India, of appropriating incidents from world events and recycling them into justifications for our own exclusions. We would be wise however to see the Iran protests for what they truly are—not about oppressive religions, but repressive, violent states. The Iran events do indeed illustrate the perniciousness of the ‘Hijab is essential to the practice of Islam’ argument being bandied about in the Indian courts today. But more importantly, the Iran events signify a tremendous revolt against a murderous and dictatorial state. It’s not a repudiation of Islam that makes the brave women in videos like the one below risk certain torture as they cast off their hijabs chanting death to the dictator, it’s the certainty of belief that they have the right not to dance to the diktats of a dictatorial state.

May the Iranian women dance free of the  vicious grip that is choking their freedoms today and always. And may we take the lessons that matter from their stupendous courage, even if it’s just to open our eyes and recognise the grip that has already begun to close around us.