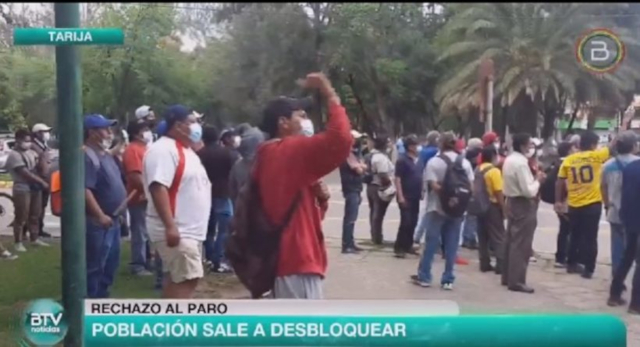 (Image by Captura de pantalla BTV)
Monday 8 November was the anniversary of the first year of the government of Luis Arce and David Choquehuanca, and at the same time the pro-Santa Cruz civic committee led by Rómulo Calvo of the ultra-right and allied with the governor of the department of Santa Cruz, Fernando Camacho, began an indefinite strike with road blockades.

In the face of this situation, the presidential binomial received strong backing from the unity pact and the Bolivian labour federation (COB). The excuse for the strike lies in the rejection of a package of measures, mainly Law 1386 on the legitimisation of illicit profits and the financing of terrorism. The aim is to stage another coup d’état and/or create a climate of such ungovernability that Luis Arce resigns, not without riding on the internal and strong political disputes between the main political figures of the MAS-IPSP.

The different blockades in the country, which have their epicentre in Santa Cruz, were unblocked by the police in fulfilment of their duties, but also by citizens and MAS militants, which provoked confrontations in various parts of the country. In Potosí, as a result of the clashes between the two sides, an indigenous man was killed and dozens of people were arrested and injured, triggering the radicalisation of the strike.

The indefinite strike is part of a chain of actions, part of a destabilising onslaught that began with the electoral defeat of MAS during the sub-national elections last March. Several coup supporters, including coup leader Fernando Camacho, won the elections.

Chronology of the indefinite strike:

MAS-IPSP facing the same stone
The same actors of the 2019 coup are once again rearticulating themselves with the same strategies to attempt a new coup offensive, only today they have the added bonus of occupying important political posts that they did not have in 2019 and of valuable coup experience. Although the political power of the coup perpetrators remains at the regional level in Santa Cruz, they have conquered a new stronghold in Potosí, where a young man was killed.

Undoubtedly, the role of the police in resolving the conflict is vital, and President Luis Arce has made a masterful move to relieve the top police commanders after their dubious role during the clashes in Potosí. The future of this institution, as well as that of the F.F.A.A., must be closely monitored, as the right wing is intent on turning the tables on this issue.

The political situation is complex, as it must be borne in mind that political power lies not only with President Luis Arce and Vice-President David Choquehuanca, but also with Evo Morales, president of MAS, and his “entourage”, as well as with the Unity Pact and the COB. It must be borne in mind how the internal politics and political disputes of these actors will play out in the midst of a coup offensive. This moment is propitious for personal political calculations and for cleaning up devalued images.

Let us remember that the fall in the image of Evo Morales’ “entourage”, who make up the MAS elite, was of such magnitude that during the 2020 election campaign, Luis Arce and David Choquehuanca had to promise the “renovation of MAS 2.0 with youth as a protagonist” and the non-integration of the latter into his new government. In this line, in the Waths App groups and social networks, they are accused of benefiting from the conflict to press for their return as “saviours” of a situation whose administration in 2019 will be in evidence.

The decisions taken to dismantle the coup attempt in time will depend on these internal factors. Luis Arce’s speech in the Cochabamba tropics was along these lines, where he called for “unity in the popular movement, in social organisations, in the instrument, the national government and the legislative assembly”. For those who know the issue from the inside, it was clear that these sectors do not work as a bloc and respond to different powers in dispute.

Luis Arce and David Choquehuanca, together with the federation “Tupak Katari” and “Bartolina Sisa”, announced a town meeting on 14 November in La Paz in defence of democracy. For his part, Evo Morales announced a march on 23 November from Oruro, which is expected to arrive in La Paz on 29 November. Although the rally was held in a closed stadium in the Cochabamba tropics, it is still regional in scope and in a stronghold that Evo has secured. The march announced by the ex-president will not be attended by the organisations of the indigenous hard core of El Alto and the Ponchos Rojos who live in La Paz, as they reject “evismo” and have given their full support to Luis Arce and David Choquehuanca.

At the same time, there is a strong demand in the social networks that indigenous people should not be used again as cannon fodder, as in 2019-2020, who do not hold important political posts and are accused of being “functional to the right” for demanding self-criticism from the MAS colonial left-wing elite, as in the case of Segundina Flores, leader of “Bartolinas Sisa”. It is also urged that this elite should lead the marches as they claim credit for the recovery of democracy in 2020, without even mentioning the indigenous protagonists of the blockades that forced Áñez to set an election date. On the other hand, the “pititas” (citizen supporters of the coup leaders) who are inside the state structure that has wrongly not been dismantled are ironically asked to march.

The social and political crisis in Bolivia will demonstrate the level of maturity of the unity pact and the COB, in their capacity to resolve in times of crisis, even in the worst case scenario when the leadership is not up to the task, as in 2019. A key fact is that the leadership of the unity pact is new; they did not participate in the recovery of democracy through the blockades of 2020. The old leadership was displaced after criticising Evo Morarles’ “entourage”.

Also, ideological convictions will be at stake, which have nothing to do with the grandiloquent and demagogic speeches that are not reflected in the concrete actions of certain sectors of MAS. It was the deceased indigenous leader “El Mallku” who summoned the fighting spirit of the Bolivian people in the midst of the desolation during the worst moment of the coup of 2019, with a powerful and clearly Indianist discourse that sectors of the “Marxist” colonial left of the MAS elite have tried to destroy.

An important factor to bear in mind in this scenario is the figure of Evo Morales, who generates confrontation within the MAS due to the internal conflicts over his “environment”, and externally with Eva Copa and the Red Ponchos, as well as with the right. At the beginning of the year, the attempt to position Evo Morales as the 2025 presidential candidate from within his entourage generated the reactivation of the right-wing with mobilisations in the country, which is why it was momentarily decided to abandon this task, at least explicitly.

Evo Morales’ media positioning, which is superior to that of President Luis Arce himself, has also generated disagreements among the 55% of MAS voters. This is due to Luis Arce’s proselytising promise to renew MAS, which runs counter to the desire of Evo Morales’ “entourage” to return to government. It also weakens the presidential figure, which is counterproductive to his role. It is for this reason that the right wing accuses Luis Arce of being “Evo’s puppet”, which is why the level of exposure of the former president in this scenario could be relevant to appease the heated climate of social polarisation and/or achieve dialogue with the right wing.