Rich Western countries like to claim they care about women and girls, but they need to do more – and directly fund those fighting for equality 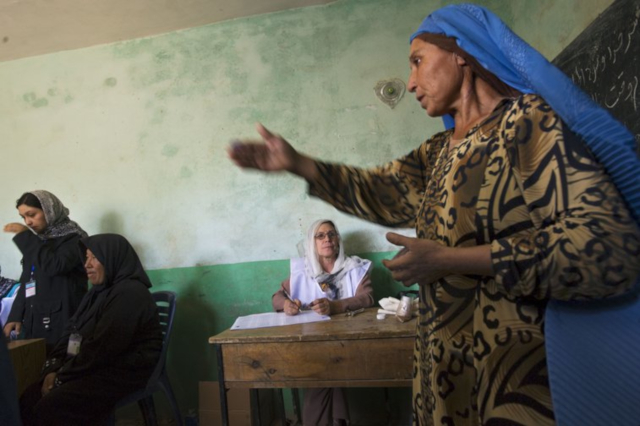 Since the Taliban seized Kabul, many headlines have – rightfully – focused on the possible impact on women and girls in Afghanistan. But too many articles have also uncritically parroted the claims of rich Western countries that their military and aid activities have supported major gains for gender equality in the country.

The facts tell a very different story – and one that should give us all pause.

The key question is not what has been supported – but who. And the answer is a grim reality that the ongoing commentary about Afghanistan has largely ignored. The international community has long failed to directly support women leaders and rights activists – those on the frontlines of fighting for change. This is a monumental, shameful failure that can and must change now.

Despite the current crisis, Afghan women’s rights leaders and activists have recommitted to fighting for a more just and peaceful future. Just days after Kabul fell, Sakena Yacoobi – founder and director of the Afghan Institute for Learning, an education and healthcare organisation – explained that many activists “are afraid […] however, they are determined to defeat this [...] and bring justice to our people.”

This kind of leadership and fearlessness, from Yacoobi and many other Afghan women leaders, reflects why, as research shows, it has always been critical that international donors drive resources and support – directly – to women’s rights, gender justice and feminist movements. This is true everywhere, but especially in the Global South.

Money for war, not equality
A colossal amount of international money has been spent on Afghanistan over the last 20 years. The US alone has spent more than $2.3tn. But the bulk of this money went to defence and military activities. As the American economist Jeffrey Sachs recently highlighted, less than 2% of US spending on Afghanistan reached local communities in the form of basic infrastructure or poverty-reducing services.

There has also been a “dramatic collapse” of Western aid to the country in recent years; US aid to Afghanistan fell from nearly $17bn in 2010 to $3bn in 2011.

But it’s not just about the top-line figures. Dig deeper and we see that Afghan women’s rights organisations, and projects that had gender equality as their principal objective, never received more than measly crumbs from the donor table.

Just how measly, you ask? When we looked at data published by the OECD (Organisation for Economic Cooperation and Development), we calculated that only 0.3% of the roughly $4.3bn spent by donors in 2019 (the most recent data available) went to such organisations and projects. More shamefully, less than 1% of all aid that was officially earmarked for gender equality was spent through such groups and activities.

These policy choices have significantly exacerbated the structural challenges facing Afghan women and girls, who have been struggling for their freedom for years. But these facts and figures, while jarring, are not unique to Afghanistan. Around the world, women’s rights organisations are vastly under-resourced.

Women excluded
Money is not the only way in which the international community has failed Afghan women and girls. Women have been systematically and consistently excluded from peace negotiations: research by Oxfam reveals that “not one Afghan woman had been involved” in any of 23 known peace talks between the Taliban, the Afghan government and the international community, between 2005 and 2014.

We [women] have not been part of the war. We can certainly contribute to peace. Fifty-one percent of people should not be ignored

This is despite massive, long-established grassroots activism by women’s rights leaders, including the mobilisation of 15,000 women from 34 provinces in 2019 to pressure all actors for an unconditional ceasefire and an end to war.

“Why I should [sic] be the only woman in the room? We have not been part of the war. We can certainly contribute to peace. Fifty-one percent of people should not be ignored,” said Habiba Sarabi – the only woman in the 12-member Afghan government delegation to peace talks in Moscow in March this year.

As Human Rights Watch said at the time, “donors did not condemn the lack of women at the Moscow summit, with a US official saying only that Washington ‘wished’ there had been more women and the EU tweeting that ‘peace required inclusivity’.” These tepid responses are disappointing, but not surprising.

Even governments’ own assessments of their activities in Afghanistan reveal failures to support women activists, women’s rights and gender justice.

“It was not until 2014 that USAID placed staff with expertise on gender issues in each of the agency’s technical offices in Kabul,” said a report released this August by the US special inspector general for Afghanistan reconstruction, and thus “for many years [...] gender analyses were often delayed or ineffective.”

We must hold such governments accountable for their failures. The international community can also learn from these mistakes – and drive resources and political support directly to women’s rights, gender justice and feminist activists.

This is not an impossible task. International feminist organisations such as the International Civil Society Action Network (ICAN), Madre and the Women’s International League for Peace and Freedom (WILPF) are all experts on how to do this. Feminist funds such as Urgent Action Fund – Asia & Pacific (UAF A&P) are working closely, right now, with their grantee partners to coordinate safe houses to support women, girls and non-binary activists on the ground.

We must all support this crucial work – and stand in solidarity with the Afghan women and girls in their long struggle for a more peaceful and just future.