ANTSAHADINTA, Madagascar — Marcel Rakotonary, 75, gives a sharp warning to visitors before they enter Antsahadinta, or the “valley of the leeches.” Located 20 kilometers (12 miles) southwest of the capital city of Antananarivo, the sacred hill of Antsahadinta is the site of royal tombs and ancient dwellings. Its forest has been protected from clearing and slash-and-burn agriculture, known as tavy, for generations.

“It is fady to cut down trees in this forest,” says Rakotonary. “Those who disobey will have their neck broken, turning their head upside down!”

Fady is a sociocultural concept made up of rules and prohibitions passed down from the Malagasy people’s ancestors. It can apply to a place, a person or to certain animals and plants. In Madagascar, this invisible network of spiritual commandments or taboos is, in general, strictly observed.

“In Madagascar, where animism is still prevalent, it is believed that the boundary between the sacred and the profane is defined by the fady,” says Michaël Randriamaniraka, an anthropologist and the executive director of Aequo Madagascar, a consulting and development firm.

Although fewer and fewer Malagasy practice traditional religion, most remain highly attuned to fady-related phenomena and beliefs. Given their ties to the ancestors, such beliefs are synonymous with respect for particular places, communities or species. People tell stories of those who have contravened fady and gone on to experience misfortune. The stories have an aura of intrigue, so they can serve as warnings.

Fady differ from myths because they are associated with institutionalized practices and appeal to a sense of place in society. Tsy ny tany no fady fa ny vavan’ny olona, goes a famous Malagasy proverb: “It is not the land that is taboo but the opinion of the community.”

When it comes to the natural environment, fady can have either a positive or a negative impact, depending on where and how they are observed. 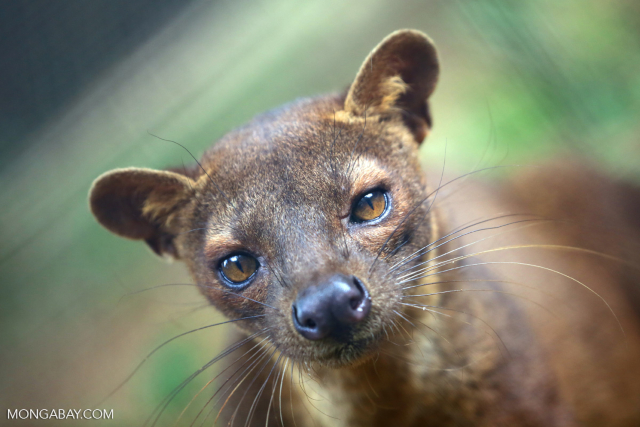 The fossa (Cryptoprocta ferox) is a carnivorous species endemic to Madagascar. It is protected from hunting in some areas by a fady linked to the belief that the animals consume the bodies of ancestors buried in the forest. Image by Rhett A. Butler/Mongabay.

Fady as environmental protection
Just like the sacred hill of Antsahadinta, many forests and water sources, often located within protected areas, are subject to fady.

In Madagascar’s southwest, Tsimanampetsote National Park is home to a salt lake of the same name that is a dedicated Ramsar site, or a Wetland of International Importance. Local people consider the lake to be sacred, and a fady protects it from diving and its birds from hunting. A story tells of foreign divers who took the risk; they never returned, and their bodies were never found.

Out of fear of the fady, the local population allows greater flamingos (Phoenicopterus roseus) and lesser flamingos (Phoeniconaias minor) to nest in safety. It is the same for Madagascar’s blind cave fish (Typhleotris madagascariensis), which are endemic to caves in the region, including some near Lake Tsimanampetsotse.

Certain species of the iconic baobab have a particular place in Malagasy culture and are considered fady. According to a study conducted by the Arboretum d’Antsokay, located near the city of Tulear, and published in the 2012 book Baobabs of the World, there is a local belief that baobabs in the southwestern region of the island are home to kokolampo, the spirits of ancestors or of the forest. These spirits are said to possess those who approach the sacred trees too closely. These forests are much feared, and therefore protected, by the local population, according to the book.

In the Andranomena Special Reserve in southwestern Madagascar, a Grandidier’s baobab (Adansonia grandidieri) has been able to grow for 100 years without being threatened by fire or illegal logging. It is considered sacred by members of the Sakalava ethnic group, who occupy the western coast of the island. In this same reserve, near Lake Andranovorinampela (“the lake where women meet” in Malagasy), stands a sacred baobab with suggestive curves. Couples hoping for fertility visit it. In addition, trees belonging to the Fabaceae plant family, particularly tamarinds and acacias, are the subject of rituals invoking the spirits. The surrounding forests are protected by fady.

On the east coast, the Betsimisaraka ethnic group follows other fady. For example, it is forbidden to eat certain foods, such as poultry, crab, and eel at certain times. A 2008 study of the Bevoahazo valley, located near Ranomafana National Park on Betsimisaraka land, indicates that fossa (Cryptoprocta ferox), a large, carnivorous mammal, are protected by a fady because they are believed to consume the bodies of ancestors buried in the forests.

According to the same study, the physical resemblance to humans of lemurs belonging to the Indriidae family, especially the Milne-Edwards’ sifaka (Propithecus edwardsi), makes them fady. These lemurs are protected in this region because the Betsimisaraka believe they embody the spirits of ancestors. Of the 107 species of lemur endemic to Madagascar, 31% are classified as critically endangered on the IUCN Red List, and hunting lemurs is illegal under Malagasy law. However, fady only apply to certain species in certain regions. 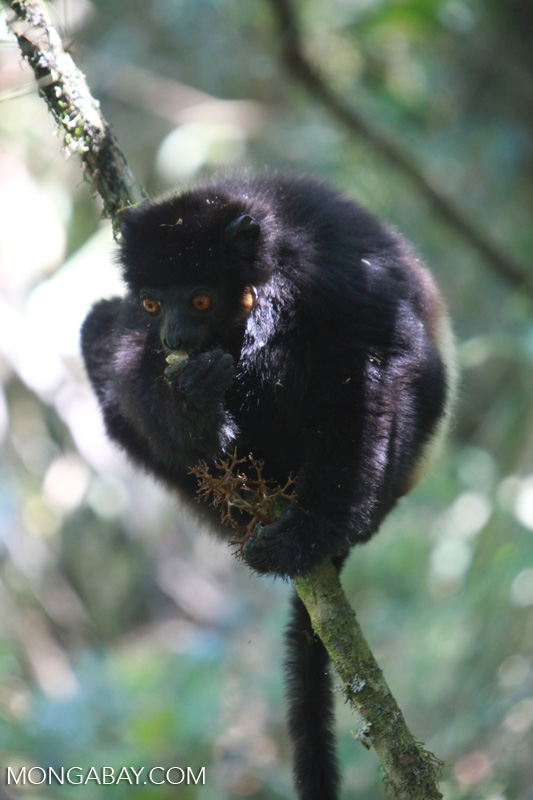 The Milne-Edwards’ sifaka (Propithecus edwardsi) is a species of lemur endemic to Madagascar. It is classified as endangered, and is protected from hunting by Malagasy law and by a fady. Image by Rhett A. Butler/Mongabay.

‘Bad-luck’ beasts
Because they apply only to certain trees, fady do not always keep the wider forest safe. In the Menabe Antimena protected area, where the Andranomena Special Reserve is home to sacred baobabs, deforestation caused by agriculture poses a real threat to biodiversity.

Fady can also have negative effects on the environment. An ancestral commandment, handed down from generation to generation, can be a factor in the destruction of entire forests. “Despite criminal sanctions, tavy is still widely practiced in eastern Madagascar because it is deeply rooted in the culture in this part of the island,” says Randriamaniraka. In this region, he says, it is fady, in the sense that it is not approved by the ancestors, to use other agricultural methods.

Meanwhile, the radiated tortoise (Astrochelys radiata), a species endemic to southwestern Madagascar and classified as critically endangered on the IUCN Red List, is illegally sold internationally. These animals are also under serious threat due to commandments considered fady. In addition to being consumed for their meat by the rapidly growing population in the region, the tortoises are sold throughout the island, destined to live as domestic animals thanks to their status as a good-luck charm.

“My whole family and I have always had tortoises in each of our homes,” says Rasoavahoaka, a 72-year-old housewife in Antsirabe in the country’s center. “We have to, because it was passed down to us that they bring good luck and protect us from thieves.”

Other species, feared because of their physical appearance, are hunted illegally. In many areas, chameleons are fady; people say they bring bad luck to those who see them. The aye-aye (Daubentonia madagascariensis), an endangered species of lemur, and the Madagascan owl (Asio madagascariensis) are also hunted because they are believed to carry evil spirits.

Jonah Ratsimbazafy, a Madagascan primatologist and president of the International Primatological Society, whom a recently described lemur was named Microcebus jonahi after, has spoken out on Facebook about the threats posed by fady to the aye-aye and the owl. Raising awareness about their protection remains difficult because of the deeply rooted belief that the species bring bad luck, he says. 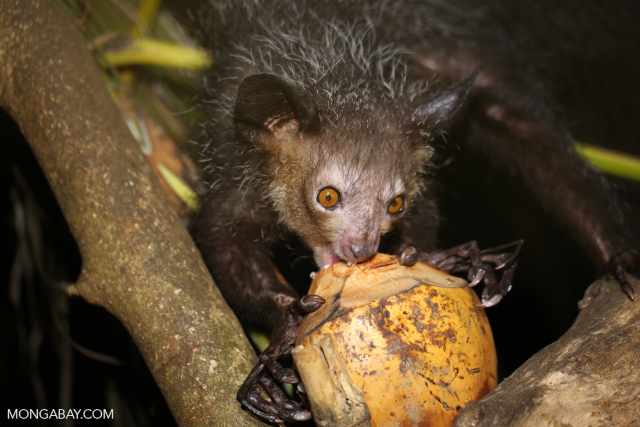 The aye-aye (Daubentonia madagascariensis), an endangered species of lemur, is hunted because it is believed to carry evil spirits. Image by Rhett A. Butler/Mongabay.

The limitations of fady
In practical terms, respect for fady is based on a fear of being penalized by society. But many factors can lead someone to disregard them. “The fady are not fixed in time and space. Since they are established by the community, the community has the power to lift them,” says Randriamaniraka. Often it suffices to obtain the consent of the community and to carry out appropriate rituals to override a fady.

An individual may disobey a fady because their survival depends on it. “If for example there is a fady prohibiting the collection of crayfish, but someone has no other options (e.g. an unmarried woman who is landless), she could perhaps break the fady,” says Neal Hockley, an environmental economics and policy expert at the U.K.’s Bangor University and a co-author of the 2008 study. 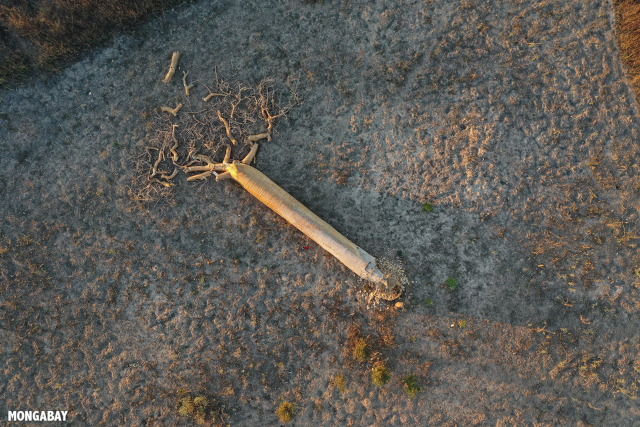 A felled baobab tree in Kirindy Forest in western Madagascar. The fady protect some baobabs, but their powers do not extend to the entire forest. Kirindy Forest is heavily affected by deforestation for agriculture. Image by Rhett A. Butler/Mongabay.

Communities use fady not only to show respect for ancestors, but also to manage local resources. According to the study co-authored by Hockley, some conservationists have suggested “that fady with positive conservation outcomes should be strengthened to achieve conservation goals.” But the authors refute this idea, writing that fady are rarely exactly aligned with the objectives of conservationists, who can’t expect to have much influence over them anyway.

Rather, a synergy between traditional institutions and conservationists could lead to more effective environmental protection, according to Hockley. “Unfortunately, I think that sometimes conservation organisations risk undermining local institutions, by depriving communities of their customary rights to natural resources,” he says.

Fady or no fady, conservation challenges blur into economic challenges. “Raising awareness about the importance of protecting the environment will not work as long as the population remains poor,” says Randriamaniraka. “The logic of an average Malagasy is: my child is hungry, so I will kill this lemur.”

Currently, population growth coupled with high poverty rates in Madagascar is increasing pressure on forests and their wild inhabitants. According to Global Forest Watch, Madagascar lost 3.89 million hectares (9.6 million acres) of forest cover between 2001 and 2019, a 23% reduction since 2000. On a global scale, the COVID-19 pandemic has increased poverty, reduced the monitoring of protected areas, and impacted the work of conservationists.

Despite the importance of fady in Malagasy culture, rising poverty may cause people to turn their backs on ancestral traditions and toward whatever resources are available. Jean Toa Soa, a tour guide at the Arboretum d’Antsokay, has observed this shift firsthand around Andatabo, a hill in the Tsijoriake protected area in southwestern Madagascar.

“There are fady places in Andatabo, but it’s not like before,” he says. “Very few people respect them, and they cut wood for charcoal. We don’t know if this is due to the modern age or to poverty.” 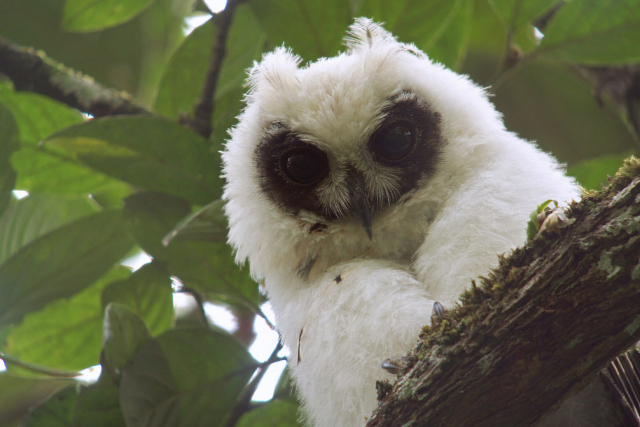 A juvenile Madagascan owl (Asio madagascariensis). The species is hunted because it is believed to carry evil spirits. Image by Frank Vassen via Wikimedia Commons (CC BY 2.0).