The global social division of fear and hope alongside the power of capitalism since the fall of the berlin wall has meant that human rights are being ignored. 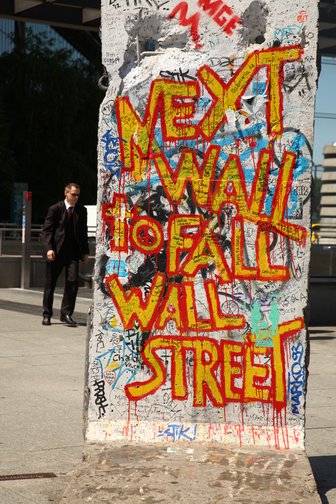 "Next wall to fall Wall Street" is written on a part of the former Berlin Wall, highlighting the development of capitalism since the fall of the Berlin Wall | Artwork: EL BOCHO, Photo: Wolfram Steinberg/DPA/PA Images. All rights reserved

Baruch de Spinoza, the great 17th century philosopher, wrote that the two basic human emotions (or “affections”, as he called them) are fear and hope, and he suggested that a balance needs to be struck between the two, because fear unmingled with hope leads to despair and hope unmingled with fear can lead to destructive self-confidence. This very idea can be applied to contemporary societies, especially at a time when, what with cyberspace, instant interpersonal digital communications, the massification of industrial entertainment and mass customization of commercial and political microtargeting, collective sentiment is becoming more and more “like” individual sentiments, even if it is still made up of selective aggregates. That is why identification with what you hear or read is so immediate these days (“it is what I think” – even if you have never really thought about “it” before), as is also the case with loathing (“I knew I had reasons to hate it” – even if you have never really hated “it” before). Thus, collective sentiment easily becomes an invented memory, somewhere in the future of the past of individuals. The only reason this has become possible, of course, is that, in the absence of any alternative, the degradation of the material conditions of life makes you vulnerable to reassuring ratifications of the status quo.

Once we convert hope and fear into collective sentiment, we come to the conclusion that there may never have been such an unequal global distribution of fear and hope. The vast majority of the world’s population live in fear – fear of hunger, war, violence, disease, employers, job loss or the likelihood of never finding a job, fear of the next drought or the next flood. Almost invariably, that fear is experienced without the least bit of hope that something can be done to make things better. In contrast, a tiny portion of the world’s population lives in such an excess of hope that they seem utterly devoid of fear. They are not afraid of any enemies because they deem the latter to be either destroyed or disarmed; they are not afraid of the uncertainties of the future because they are well insured against every possible risk; they are not afraid of the uncertainties at home because they can move to any other country or continent at any moment (and are even looking into the possibility of occupying other planets); they are not afraid of violence because they have security experts at their service, along with sophisticated alarm systems, electrified walls and private armies.

The global social division of fear and hope is so unequal that a number of phenomena that used to be unthinkable less than thirty years ago now strike us as being the ordinary features of a new normal. Workers “accept” being more and more exploited through labor, with no rights whatsoever; young entrepreneurs “confuse” autonomy with self-enslavement; racialized populations are confronted with racist prejudices, often on the part of supposed non-racists; women and LGBTQ people continue to be the victims of gender-based violence, notwithstanding all the achievements of feminist and anti-homophobic movements; and non-believers as well as believers of the “wrong” religions are the victims of the worst forms of fundamentalism. At the political level, democracy as the rule of the many for the benefit of the many tends to be turned into rule of the few for the benefit of the few; democratic normalcy allows itself to be infiltrated by the fascist-leaning State of exception, at the same time that the judicial system, understood to be the empire of the law for the protection of the weak against the arbitrary power of the strong, gradually turns into a legal war waged by the powerful against the oppressed and by the fascists against the democrats.

It is imperative to change this state of affairs, lest life become utterly unbearable for the vast majority of humankind. The moment the only freedom left for that vast majority is the freedom to be miserably destitute, we will be face to face with the misery of freedom. In order to get out of such hell, seemingly programmed by a voracious and quite unintelligent design, the unequal distribution of fear and hope needs to be altered. It is imperative that the vast majority regain some hope, and for that to happen it is imperative that the small minorities filled with excessive hope (caused by their not fearing the resistance of those who have but fear) feel fear again. This will require many ruptures and struggles at the social, political, cultural, epistemological, subjective and intersubjective level. The last century started off feeling optimistic that ruptures with fear and struggles for hope were at hand and that they would be successful. Initially, that optimism went by the initiatory names of socialism and communism. These were later joined by a new constellation of names, such as republicanism, secularism and laicism. As the century progressed, other names and phrases came along, such as liberation from colonial rule, self-determination, democracy, human rights, women’s liberation and emancipation, etc. In this first half of the 21st century, we live in the midst of the ruins of many of those names. The first two seem, at best, relegated to history books, sunk into oblivion at worst. The rest lay, if not disfigured, then at least benumbed by the accumulation of as many defeats as they had victories. This is why the ruptures and struggles against the despicably unequal distribution of fear and hope are bound to be a gigantic task, in view of how fragile all the tools at our disposal are. In fact, this discrepancy is itself a manifestation of today’s imbalance between fear and hope. The struggle against the imbalance must start by making use of the very tools that mirror the imbalance. Only through successful struggles against the imbalance will it be possible to beckon to the vast majorities with the spread of hope and the dwindling of fear.

When foundations sink, they turn into ruins. When there seems to be nothing but ruins around you, the only choice left for you is to search among the ruins, looking not only for the memory of what used to be better, but first and foremost for how to disidentify yourself from whatever it was that, in the design of the foundations, made the whole edifice so fragile. The process consists in turning dead ruins into living ones, and it shall have as many dimensions as is required by a forward-looking socio-archaeology. At the start of a new year, lets begin with human rights. Human rights have a dual genealogy. In the course of their long history since the 16th century, they have successively (and sometimes simultaneously) served to legitimize Eurocentric, capitalist and colonialist oppression and to legitimize the struggles against that very oppression. But they have always been much more an instrument of oppression than an instrument in the struggle against oppression. Hence their contribution to today’s situation of extreme inequality in the global division of fear and hope. In the middle of the last century, after Europe was ravaged by two wars whose effects had an impact across the globe due to colonialism, human rights reached a high point with the promulgation of the Universal Declaration of Human Rights, which was to provide the ideological underpinnings of the work carried out by the United Nations. On 10 December of last year, the Declaration celebrated its 71st anniversary. This is not the place to embark on a detailed analysis of the declaration, which was far from universal in the first place (it is actually very much Eurocentric, both culturally and politically), but which has gradually come to stand for a global narrative of human dignity.

It can be said that from 1948 to 1989 human rights were mostly an instrument of the cold war, though this remained a minority view for quite some time. The hegemonic rhetoric of human rights was used by Western democratic governments as a way of stressing capitalism’s superiority vis-à-vis the type of communism of the socialist bloc formed by the Soviet and Chinese regimes. According to that rhetoric, human rights violations occurred exclusively within this bloc and in every country that sided with it or came under its sway. Violations in “friendly” Western countries, over which the US increasingly extended its own sway, were either ignored or silenced. For a long time, Portuguese fascism benefited from this “sociology of absences”, as did Indonesia when it invaded and occupied East Timor, or Israel from the beginning of its colonial occupation of Palestine to the present. Generally speaking, European colonialism was for a long time the main beneficiary of this sociology of absences. Capitalism’s moral superiority over socialism was built in this manner, with the active collaboration of the socialist parties of the Western world. This process was not free of contradictions. Throughout this period, human rights were often invoked by social organizations and movements in capitalist countries and countries under US influence, as a form of resistance against egregious violations of those rights. At the international level, imperialist interventions by the United Kingdom and the United States in the Middle East and by the United States in Latin America throughout the 20th century were never considered to be human rights violations, in spite of the fact that numerous human rights activists sacrificed their lives to defend them. On the other hand, the political struggles waged in many countries, and in North Atlantic capitalist countries in particular, have gradually expanded the number of human rights, adding social, economic and cultural rights to the list of civil and political rights. Thus, there emerged a divide between those (the liberal camp) who prioritized civil and political over all other rights, and those (the socialist or social democratic camp) who gave priority to economic and social rights or the indivisibility of human rights.

The supposed historic triumph of human rights is leading to an unprecedented degradation of the expectations of a decent life for the majority of the world's population.

The fall of the Berlin Wall in 1989 was viewed as the unconditional triumph of human rights. However, subsequent international politics showed that human rights had fallen along with the socialist bloc. From then on, the form of global capitalism that had been establishing itself since the 1980s (neoliberalism and global financial capital) fostered an increasingly narrow narrative of human rights. It fought against social and economic rights at first, and now, at a time when economic freedom has gained priority over all other freedoms and the far right is on the rise, even civil and political rights – and liberal democracy with them – are being challenged as obstacles to capitalist growth. These developments have confirmed the connection between the hegemonic conception of human rights and the cold war.

In view of all this, we are faced with two paradoxical and disturbing conclusions and a very demanding challenge. The supposed historic triumph of human rights is leading to an unprecedented degradation of the expectations of a decent life for the majority of the world's population. Human rights have ceased to be a conditionality in the context of international relations; thus, rather than subjects of human rights, individuals and peoples have, at best, been reduced to objects of human rights rhetoric. As for the challenge, it can be phrased in the following terms: Is it still possible to turn human rights into living ruins, a tool for turning despair into hope? I certainly think so. In my next column I will seek to salvage the seeds of hope inhabiting the living ruins of human rights.