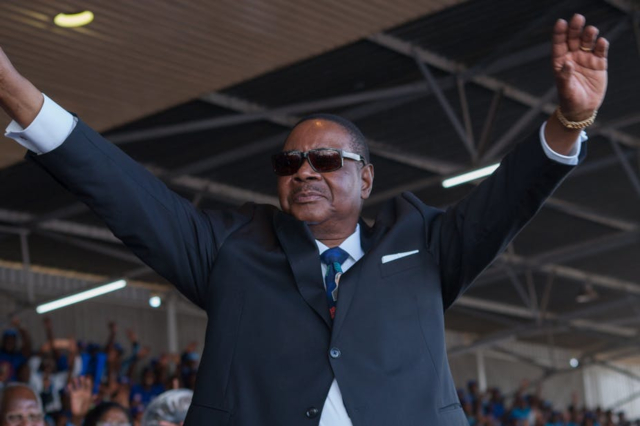 Malawi’s President elect Peter Mutharika waves to supporters during the swearing in ceremony in Blantyre in May last year after the contentious poll. AMOS Gumulira/AFP via Getty Images

The lengthy, meticulously detailed and unanimous ruling by a five-judge panel has attracted widespread acclaim within Malawi and abroad. With the exception of one case in Kenya, it is not normal for courts in Africa to annul election results even when there is evidence of massive irregularities. Once results are announced it is often taken for granted that no court would overturn them.

The constitutional court in Malawi observed that:

Given the gravity of … irregularities, the conduct of the Electoral Commission in managing these elections was severely lacking and demonstrated incompetence for failing in multiple dimensions to follow clearly laid out legal processes for such elections.

The court challenge followed numerous protests organised throughout Malawi after the May 2019 election. These played a crucial part in the overall scheme of things. Mass demonstrations held in the past nine months signalled to the judiciary and the international community that Malawi had changed. The clear message was that Malawians were no longer willing to simply accept a fate handed out to them.

Malawi’s judiciary deserves to be praised. But the power, agency and influence of the Malawian people cannot be underestimated.

What will be the effect on democracy in Malawi? Relying on the courts alone to resolve political disputes is not a viable alternative to democratic consolidation. President Peter Mutharika and the Malawi Election Commission have unsurprisingly wasted little time in appealing the ruling. The supreme court, to which they have appealed, has the power to overturn decisions of lower courts – including the constitutional court.

The judges of the supreme court will, however, be under great pressure to not quash the detailed legal arguments put forth by the constitutional court.

New round
As the country gears up for new elections, there are reasons to be concerned. The outcome of future elections will not be viewed as more legitimate if the electoral rules remain unchanged. One significant flaw is that the laws do not require a 50+1 majority for victory.

A new round of elections offers an opportunity to strengthen civil and political freedoms. It also promises to ensure greater accountability for those in power in relation to their performance and promises. Ultimately, this could lead to increased responsiveness of the state in delivering public services.

But is there adequate administrative capacity to undertake radical changes at such short notice? What will the Malawi Election Commission do differently now?

The most urgent change that’s needed is to ensure that elections don’t result in narrow mandates for the winning candidate. Zambia amended its electoral laws a few years ago to ensure that only a candidate who gets more than 50% of the votes is declared winner. Alternatively, a second round is conducted for the top two candidates if none failed to secure more than 50% in the first round.

A similar amendment was submitted to Malawi’s parliament but was rejected due to internal party politics. The proposed amendment was derived from a report by the Malawi Special Law Commission on the Review of Electoral Law in 2017.

Other challenges include financing yet another expensive round of elections and ensuring a successful election process without irregularities. This will be difficult to do at such short notice.

All these are reasons to be cautious. Experience elsewhere points to the fact that court judgments, however favourable, don’t deliver great democratic outcomes.

The lessons from the re-run of the presidential elections in Kenya in 2017 serve as an illustrative example. After the initial euphoria, the boycott of the subsequent re-run by the opposition proved to be a huge disappointment.

Democratic consolidation
The process of consolidating democracy in Malawi has been fragile.

The capacity to organise successful elections is a key indicator of democracy consolidation. The country held its first democratic poll in 1994. The introduction of democracy resulted in numerous changes in electoral legislation, statutes allowing registration and competition of parties, frequency of national elections, and the freedom of the press.

But Malawi has underperformed in a number of areas.

For example, a survey conducted by Afrobarometer – a pan-African, non-partisan research network that conducts surveys on democracy, governance and economic conditions – shows that trust in the electoral management body fell from 49% in 1999 to 34% in 2019. Public support for elections as a means of choosing leaders has also significantly fallen, from 78% in 2003 to 55% in 2017.

Reliance on courts
The findings of a more recent survey provide useful insights into how Malawians perceive their courts. A large majority of the respondents considered the courts as impartial and trustworthy. They were also of the view that the president must always obey court rulings, even when they believe these are incorrect.

But Malawians were split on whether the losing side in an election should always enjoy the right to challenge its defeat in court.

When the courts are conceived to be the ultimate defenders of democracy, the judicial system risks being burdened with an overload of expectations and trying to satisfy a large number of political interests. The regression of electoral governance over a long period requires constant observation, monitoring and commitment by all stakeholders. These include voters, political parties, media, civil society organisations and international agencies.

When key stakeholders slacken in their duties, they put additional pressure on the courts. Multiple actors – not just the judiciary – must step in to ensure that a young democracy matures and consolidates.

In Malawi, the need right now is to overhaul the model of electoral governance. Reforms should focus on a system that relies less on the judiciary and more on other national and local institutions that can function responsibly and effectively.

Original Contents by The Conversation