Three incidents of firing in four days – two in Jamia Millia Islamia and one in Shaheen Bagh – quickly followed open calls to violence (‘goli maro saalon ko‘) by Union minister of State for Finance Anurag Thakur and the demonization of Shaheen Bagh protesters by BJP MP Pravesh Verma (‘the protesters will enter your homes and rape and kill your daughters’ if Modi and Shah aren’t there). In the case of the Shaheen Bagh shooter, Kapil Gujjar, the Delhi Police (which has till date not managed to find out the JNU attacker Komal Sharma’s affiliation) was quick to link him to the Aam Aadmi Party (AAP) – an allegation expressly denied by his father. All these episodes, so obviously set up, basically aimed at provoking the protesters into committing some violence that the lapdog television channels would then play up, in their usual hysterical style (some of them may even have appeared on air in police uniform!), to vitiate the atmosphere. 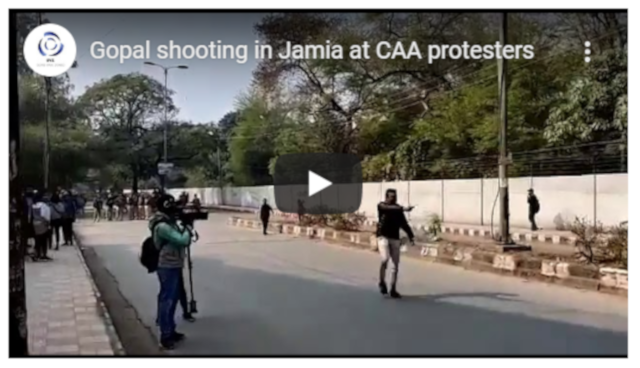 On the very first shooting, one such channel did indeed keep doing precisely that till long after the identity of the shooter (in the clip above) had been clearly established. The clips were circulating almost instantaneously and you can hear the gunman shouting Delhi Police zindabad, and there was little chance of mistaking him for an anti-CAA protester. The channel knew exactly what it was doing and at whose behest but kept on at it till 9 o’clock at night.

All these desperate acts had been precededby  an earlier attempt at provocation by the sudden, unexplained appearance in Shaheen Bagh, just two days ago, of two of the regime’s most trusted media lapdogs. Their appearance was interesting as well as ominous, given the fact that they are reputed not to generally step out of their studios – for they know which side they are on without have to ever visit the field of action.

The ‘post-truth’ character called Amit Shah – and his master of course – was determined to vitiate the atmosphere and create a Hindu-Muslim polarization. Remember Amit Shah’s speech to BJP social media volunteers two years ago where he boastfully claimed that ‘we can make any message go viral, real or fake’? That wasn’t empty bluster – though the man is given to bluster as well. We have repeatedly seen this ‘post-truth’ media game play out over the last six years, under the aegis of this man.

In a way, all of us know all the facts mentioned above. But what we have not perhaps recognized yet, is that we are up against a fascist machine where the old RSS is only one node – and one that is totally out of this game of contemporary mediatized post-truth politics. This part of the game has been developed largely under the direct stewardship of the duo that rules this country today, with hired international PR firms playing their role in it as well. With institutions like the Election Commission and the higher judiciary lying prostrate, already crawling when asked to bend, we in any case, face a formidable challenge. But this part of the game is something else altogether: any fantastic scenario can be conjured out of thin air (for instance, ‘the protester will enter your houses and rape and kill your daughters’) and entire populations can be passed through a simulated ‘video game’ where they think they are fighting a real enemy – an enemy that surrounds them and is present everywhere in the form of secularists, intellectuals, rights activists and others (Urban Naxals, tukde-tukde gang etc) who are in cahoots with the demonic Muslims and the always-present ‘Pakistan’.

The key element of this game is the media – ‘doctored videos’, fake clips, phtopshopped images, television anchors acting as lynch mob instigators, 24/7 noise about the ‘inflitrator’/ enemy, and so on. So it is not surprising that even someone like Arvind Kejriwal, who has tried to walk an extremely tight rope by avoiding appearing anywhere near the protests or visiting Shaheen Bagh (which, again TV channels tried their utmost to get him to do), was eventually painted as a Muslim appeaser and even connected to Pakistan (‘taar Pakistan se jude hain‘) in the words of Yogi Adityanath. The BJP and RSS have even being portraying the anti Ctizenship Amendment Act (CAA) protests as as sponsored by AAP, while simultaneously presenting one of the shooters as also from AAP!

In fact, the violent attacks by the combined forces of the police and suspected RSS goons (innumerable videos and photographs record episodes of their involvement) against anti-CAA protesters that took place in Jamia, Seelampur and Daryaganj were, in all probability, meant to serve two purposes, both of which failed. One, they were meant to scare the protesters into submission and break the backbone of protests, which only escalated thereafter. Two, they were meant to also use them to communally polarize the Delhi atmosphere before the polls which would have succeeded had the poll battle and the anti-CAA struggles come together.

The ceaseless attempts to connect the anti-CAA protests, the Jamia and Shaheen Bagh protests in particular, to AAP showed without any shadow of doubt how desperate the BJP was to draw the electoral battle into its favourite Hindu-Muslim-Pakistan turf. The desperation was all the greater because, from all indications, it was clear that the BJP was going to do very badly at the hustings. Especially as it became clear that AAP was simply refusing to take the bait and was resolutely focused on keepng the election contest confined to issues of education, health, electricity and water – on the work done in the past five years in short.

This is the overall context in which one must see AAP’s refusal to get drawn into the BJP’s home turf – though, as I said in my open letter to Arvind Kejriwal (on facebook), this cannot by any means justify the way in which top AAP leaders like Manish Sisodia and Kejriwal himself, got into a game of oneupmanship with the BJP, challenging it to arrest Sharjeel Imam or worse, clear the Shaheen Bagh protest. As I said in that open letter,

‘I was struck earlier when both Manish Sisodia and then you made what could only be called an ill-informed and ill-thought out statements on Sharjeel Imam. Both Manish Sisodia and you got into a game of one-upmanship with the BJP and indeed Amit Shah. It is one thing to say that you disagree, strongly disapprove or even condemn Sharjeel Imam’s statements but to criminalize him and start challenging the BJP, (again saying they took four days to arrest him where you would have done it in two hours), shows that the first lessons of democracy have not been learnt. If you are a democrat, you will defend the right of even those you vehemently disagree with, to speak without fear.
The long supreme court jurisprudence on sedition is very clear that simply holding opinions and even propagating them does not constitute sedition. Even believing in and advocating armed struggle is not sedition according to this jurisprudence. And use of anti-terror extraordinary laws like the UAPA – for making a statement! – go against the very grain of any kind of democratic practice. Yet neither Manish Sisodia nor you had any compunction in indulging in such talk.’

At another level, however, one shudders to think of what might happen not just to Delhi but to the protests, Shaheen Bagh included, if tomorrow the BJP were to win the Assembly elections. Is there any doubt that they will without any hesitation unleash their goons and the police to vacate the protest sites all over Delhi? And if that is clear to us, it should also be clear that anything that we do that directly or indirectly increases the BJP’s chances in Delhi is bound to be self-defeating?

That is where the complexity of the situation, and of the struggle against fascism lies. The most fundamental point at issue here is that the different forces that stand opposed to both the present regime and its larger fascist project (the CAA being its most direct weapon) need to understand that while their struggles are complementary, they cannot simply unite in a ‘broad popular front’ and hand over the battle to the BJP.  This means they have to understand that while they are ultimately fighting for the same longer term common vision of the India we want, in the short run their situation may entail some conflicts that need to be dexterously handled. A similar situation exists in many states also between parties where the problem is even more serious because the parties are also politcal adversaries and don’t seem to be able to get over their ‘business-as-usual’ approach.

There is one thing that AAP has got absolutely right – almost in a Spinozan fashion, one might say: that it is the precarity and insecurity of everyday life of ordinary people that makes them susceptible to the politics of fear. If you  are able to take care of that fundamental problem of popular existence, you might have won half the battle. ‘Superstition’ says Spinoza, ‘is engendered, preserved and fostered by fear’ (A Theological-Politcal Treatise, ‘Preface’) – and we might add here that so is the tendency to fall for the various kinds of superstitions of the kind peddled by the RSS and the BJP. Hindutva politics is only possible as long as Hindus are kept in a state of fear of conspiracies being hatched by some unknown other. ‘For, as the mass of mankind remains always at about the same pitch of misery’, continues Spinoza, ‘it never assents long to any one remedy, but is always best pleased by a novelty which has not yet proved illusive.’ There is a lot here that needs unpacking which we will leave for another occasion but it is worth remembering that if Hindutva politics feeds on one kind of fear, the old way of fighting it, notably by the Congress and secularists of all hues, only invokes another kind of fear for the minorities, thus keeping them captive in its fold, while effectively doing nothing about the actual problems that make their everyday lives more precarious. The lesson of AAP’s ‘politics of the commons’ (that is to say, a modern commons, regardless of any community, caste or any other consideration), is that fear can only be fought by making courage possible, and that is what I want to hold on to and find promise in.

This does not mean however, that one must hold back on criticism when it comes to critical questions that concern democratic practices in politics.