On December 19th, 2019 when the Portuguese Prime Minister Antonio Costa, while commemorating the 150th anniversary of Mahatma Gandhi's birth, in India, announced that Portugal will be launching a Gandhi Citizenship Education Prize in order to help perpetuate Mahatma Gandhi’s ideals, perhaps he did not know that his Indian counterpart Narendra Modi stands against them. Today we commemorate the assassination of Gandhi by an Hindu nationalist, occurred on January 30, 1948; it is all the more relevant to briefly analyse the distance between Modi’s India and the India Gandhi strived for. Gandhi’s vision of peace, communal-harmony, and non-violence seem more relevant than ever before in today’s India rife with state violence against religious minorities, communal hatred, authoritarian rule, and Hindu nationalism – which is based on cultural pride and Hindu superiority over other religions. 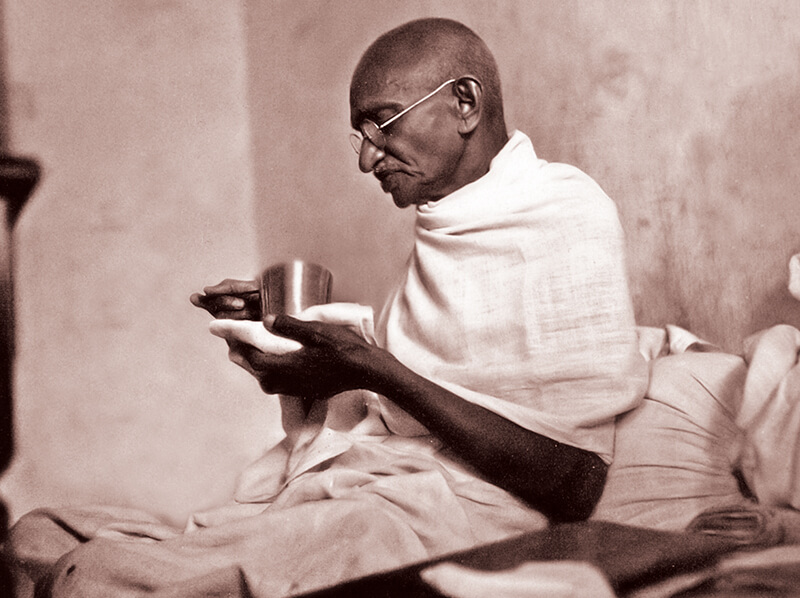 Although Gandhi may be revered in the world over for championing the people’s struggle for freedom, Hindu fundamentalists never liked his ideas of inclusive citizenship (irrespective of caste, creed and religion), religious pluralism, and Hindu-Muslim brotherhood. In fact, Hindu Mahasabha (a Hindu nationalist organization) leader Puja Shakun Pandey shot at an effigy of Gandhi with a toy gun on his death anniversary, and in another incident the ruling Hindu nationalist Bhartiya Janata Party party’s leader Pragya Thakur's called Mahatma Gandhi's killer "a patriot".

In an increasingly intolerant India, under Prime minister Narendra Modi, peaceful protestors are often met with state violence. Ruling BJP (Bharatiya Janta Party; meaning India’s People’s Party) state chief minister, Yogi Adityanath, BJP chief minister of Uttar Pradesh and a militant Hindu nationalist, pledged to take revenge on protesters in the wake of the unrest concerning the Citizenship Bill and the National Register of Citizens, which could result in millions of Muslims being declared illegal aliens in their own country. Interestingly a draconian colonial-era regulation is being used to shut down protests against the new citizenship law in India. Narendra Modi's government has even been criticized by international media and also by European parliament condemnations for stoking communal division in Indian society.

India's ranking in the latest global Democracy Index has dropped 10 places to the 51st position out of 167 owing to violent protests and threats to civil liberties challenging freedoms across the country.

Today’s India, where freedom of expression is being criminalized, is certainly not the India that Gandhi had imagined. Today the government persecutes religious minorities and the Hindu majority is becoming intolerant to dissenting views. Had Gandhi been alive, he would have fought tooth and nail against hegemonic Hindu nationalism, protested against anti-Muslim Citizenship bill, and would almost certainly been declared ‘anti-national’ by Hindu nationalists.

Interestingly, besides its vast cultural diversity, India is also known for Mahatma Gandhi’s principles of non-violence and civil disobedience – a method he mastered against British colonialist and that won India’s freedom in 1947. Gandhi’s peaceful method of non-violence seems to hold no sway over Hindu fundamentalist leaders. Syncretism, pluralism, and tolerance – values that Gandhi stood for – are being rejected outright by the Modi government. Unlike Hindu nationalism, Gandhi’s patriotism sought a diverse and unified India that included all communities.

Nevertheless, the current government certainly underestimates the power of peaceful protests, and disregards Gandhi’s ideas of civil disobedience through non-violent resistance. Gandhi mobilised the Indian masses, carried out major nationalist movements, such as the Non-Cooperation Movement (1920-22), Salt Satyagraha (1930), and the Quit India Movement (1942). Gandhi's ideas of non-violence and civil resistance also influenced other civil disobedience movements across the globe. Martin Luther King, Jr. drew on his methods and strategies during the Civil Rights Movement in the United States, and the Dalai Lama was inspired by his teachings.

Gandhi’s activism was shaped by Hinduism and Jainism – Indian religions. In particular, he drew on the Hindu text “Bhagavad Gita” in a religious framework based on the values of simplicity, duty and non-violence. Gandhi’s writings exhort readers not just to avoid physical violence but also mental violence (such as acting out of malice or hatred or anger). However, in independent India, violence has been embedded in the functioning of the state – a system of oppression in continuation with the colonial legacy – and remains a popular method of population management. Therefore state violence is employed and justified against peaceful protestors by the ruling leaders, its supporters, and the state sponsored media.

Interestingly, while in foreign countries Prime Minister Narendra Modi eulogizes Gandhi and appreciates the cultural diversity of India, at home, his government is actively dismantling democratic institutions, terrorising religious minorities; hounding academics, intellectuals and human rights activist. Inviting politicians like the Philippines president Rodrigo Duterte, and the Brazilian President Jair Bolsonaro as a guests of honour on India’s republic day, also reflects the kind of extremist ideology that the prime minister Narendra Modi propagates, and that is contrary to Gandhian ideas of non-violence, love and tolerance.

Needless to say, in the absence of Gandhi’s principles of inclusiveness and religious pluralism, India, which is divided by caste, religion, and language, is slowly disintegrating – essentially if not geographically. Cultural diversity and a vibrant civil society have ever since been strengths of India but are now challenged by Hindu nationalism. Also the global community is puzzled to see India as a country in which aggressive nationalism and religious intolerance have become a serious threat to democracy. In such context, Gandhian ideas of non-violence and tolerance could and should play a positive role in resisting against the failure of India’s democracy, especially by providing reinvigorated strength to India’s very rich social diversity.

Amit Singh is a Human rights researcher. He is a PhD student in Human Rights in Contemporary Societies at the Centre for Social Studies since 2017. Amit is also a research fellow at the Centre for the Study at Indian Langauges and Society, in India. In addition, he is a guest topic editor at FRONTIERS, research journal. His work is cited by the top professionals. Amit holds MSc. in Human rights and multiculturalism from University of Southeast Norway; M.A. in Human rights from Mahidol University,Thailand and M.A. in World History from Pondicherry University, India. Amit has done master thesis project on freedom of expression and religious intolerance in India. He was a fritt ord scholar, in Norway; he also did another master thesis on Insecurity of legal status of Pakistani Ahmadiyya refugees in Thailand (funded by Mahidol university alumni association, and Community Resource Centre, Thailand). He is Editor-At-Large (Human rights) at the Different truths webzine, human rights columnist at The Oslo Times, and The Citizen. His recent book is, The Conflict of Freedom of Expression and Religion- A Case Study from India, 2018. Another publication is 'Mounting Discrimination Declining Hope- Dilemma of An Indian Muslim.' His human rights advocacy materials have been published in, 'Voice of Voiceless, May 2013, Vol.3, No.1. Amit has worked with the United Nations High Commissioner for Human Rights (Bangkok, Thailand) the United Nations Development Program (New Delhi, India), the National Human Rights Commission of India and Philippines. As a project coordinator of Universal Tolerance Organization, Norway, he has coordinated Global Tolerance Forum in 2015, on issue of Religious Extremism and fundamentalism. Amit has been invited to present his research paper in various national and international forums, including University of Massachusetts(USA), York University(Canada), the International Association on the Study of Forced Migration(India), Oslo University(Norway). His particular areas of interest are religious conflict, multiculturalism, refugees, torture, Caste discrimination, religious extremism, and freedom of expression. Amit was president of the International Students' Union at the University College of Southeast Norway, and Mr. Brand Ambassador at Mahidol University, Thailand. In November 2014, as a president of the International Students' Union at the University College of Southeast Norway, Amit led a campaign to support Right to Free Education in Norway- to protest the Norwegian government's attempt to charge education fees from non-EU students. In Norway, Amit worked with Mohammad Mostafaei, an Iranian human rights lawyer and a political refugee working against religious extremism and juvenile death penalty in Iran. In Thailand, he interned with Asylum Access, advocated policy change for refugee's protection. In addition, working with Community Resources Centre in Thailand, Amit highlighted human rights violations of indigenous people's land exploitation by mining company. For his human rights activism, Amit was awarded REX global fellowship, Jan Mitra human rights award, Human rights year of the crusader (2016) award. His article, 'How Tribals In Bastar Are Threatened By Police' was selected a top stories in 2017 by an Indian youth online magazine. He has done translation work for NGOs and documentary film makers working on human rights issues in India and Denmark. In 2018, Amit was invited by Professor Catarina Kinnvell, to work as a visiting researcher at Lund university. In 2012, Amit was invited to work as a research assistant by Dr. Barbara Harrell-Bond, Emerita Professor, Refugee Research Centre, University of Oxford. Amit hold membership of European Integration & the Global Political Economy Research Network, Columbia University, and Asia Pacific Refugee Rights Network, Thailand. He regularly has been invited as a speaker on human rights issues in India. He has contributed more than one hundred articles on human rights issue in national and international online news magazine. Amit's human rights activities has been covered by local, national and international media.