Lilian Thuram’s visit to Portugal between the 26th and 28th of November could not come at a more opportune moment. After a high profile career as a footballer, Thuram has thrown himself into antiracist education through his Foundation. Their approach is captured by the proposition that “no-one is born racist, they become racist”. Invited by the MEMOIRS project1, Thuram took part in various events exploring the inequalities generated by mechanisms of oppression in European society, and how education can combat racism. He gave two conferences in the Auditorium of the Reitoria at the University of Coimbra, and at the Calouste Gulbenkian Foundation in Lisbon. He also met secondary school students through the CES vai à Escola [CES goes to school] initiative in Coimbra, and thanks to a collaboration with the French Embassy in Lisbon. 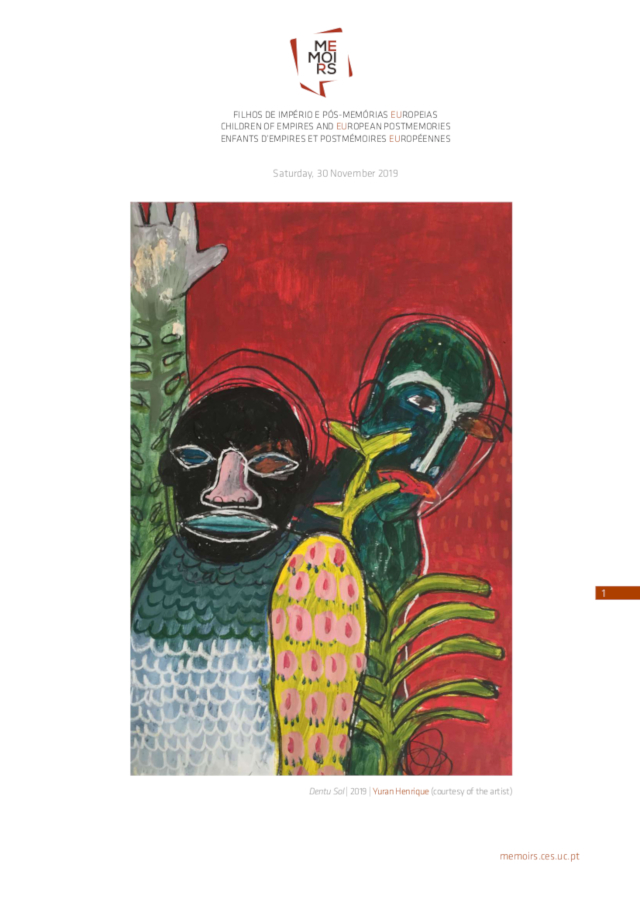 These meetings happen just as racism is taking centre stage in Portugal after the election of Joacine Katar Moreira as a member of parliament on the 6th of October. Since then, Joacine Moreira has been the target of racist and xenophobic insults. Reading them, above all through Facebook, the insults have made me indignant but they have hardly been surprising. What Joacine has come to represent in contemporary Portugal disrupts the idea of the mild customs of Portugal inherited from the imperial past.

Joacine Moreira (of the Livre [Free] Party), is of African origin, like Beatriz Dias (of the Bloco Esquerda [Left Bloc]) and Romualda Fernandes (of the Partido Socialista [Socialist Party]), elected in the same elections. Yet the racist and xenophobic insults that have circulated have been directed primarily at Joacine. What seems to have triggered the abuse is the waving of a Guinea-Buissaun flag at a celebration of her election. On this basis, and because Joacine has publicly responded to the abuse and defended the mandate on which she was elected, the insults have multiplied. Equally, other voices have begun to organize to demonstrate their solidarity with her.

It seems to me that Joacine does not bother some Portuguese people “only” because she is of African heritage, nor “only” because she is Black and occupies a prominent place in Portuguese society. Indeed Portugal, certainly since the Estado Novo, has something of a “tradition” of promoting Africans and people of African heritage and using them to represent the country at national and international levels. For example, in Thuram’s own sphere of football, Eusébio da Silva Ferreira is still considered one of the finest Portuguese players of all time. Like Matateu and Coluna, who played in the same team, he was born in Mozambique, at that time still an “overseas Portuguese province”. In the world of music, even during the colonial period Portugal was represented internationally by performers of African origin. For example, in 1967 Eduardo Nascimento represented Portugal in the Eurovision Song Contest. The title of his song, “The Winds Changed”, clearly referenced Harold MacMillan’s famous “Winds of Change” speech in the South African parliament. In February of 1960, Macmillan had said: “The wind of change is blowing through this continent, and, whether we like it or not, this growth of national consciousness is a political fact. We must all accept it as a fact, and our national policies must take account of it”2. Although the song by Eduardo Nascimento was hardly a protest song, telling rather the “drama of an abandoned man”3, it could hardly be ignored that this man, born in Angola, was the first Black man to compete in Eurovision (4). At that moment Portugal had been involved for four years in a war against the “winds of change” of the liberation movements in Angola, and the war was spreading to Mozambique and Guinea-Buissau.

During the colonial war Africans figured prominently in how Portugal was represented to the world. From the beginning of the conflicts Africans were the object of attention in national and international propaganda, and African fighters in the Portuguese Armed Forces occupied an important place in this. For example, the descriptions distributed in the press of Adriano Moreira, the Minister for the Overseas, to Angola, between April 13th 1961 and December 1962, revealed this approach. On the front page of the Diário de Notícias of 16th May 1961, a photograph shows Adriano Moreira with an African man. The caption reads: “The Minister for the Overseas talking to a black5 official who lost an arm defending the Fatherland”6.

Any number of examples could illustrate how colonial propaganda during the war presented Africans as exemplary Portuguese citizens and put them forward at significant moments of celebration and reinforcement of the imperial and integrationist ideology of the regime. To take just one instance, the official ceremonies of the 10th of June 1969 saw the Second Sergeant Marcelino da Mata, originally from Guinea, came to Lisbon to receive the highest honour of the Portuguese army: the Tower and Sword. This ceremony was described, two days afterwards, with the headline “Morning of the Heroes”. In the article beneath, we read: “the President of all the Portuguese offers the highest honour to an African soldier for his feats in the Province of Guinea”. It continues, “Soldiers of Portugal. There runs in your blood the heroic breath of the brave Portuguese who have secured independence across the centuries”7. Curiously, Second Sergeant Marcelino da Mata became a Lieutenant Colonel and is today the most decorated soldier in the history of the Portuguese army.

We could give more examples of men and women of African origin who, whether in the worlds of sport, art or politics, have been prominent in colonial and post-colonial Portugal without being the target of any kind of explicit attack. We cannot say the same for Joacine. She entered a more complex world, politics, and has not limited herself to just representing Portugal. She arrived in the political sphere with a determination to denounce some of the problems that Portugal has long tried to camouflage and disguise. She has called out the colour blind, post-racial, egalitarian and meritocratic discourse that those who have attacked her appear to have swallowed. This discourse denies the centrality of the racial question in producing patterns of inclusion and exclusion. It suggests that racial inequality is a thing of the past8.

Joacine does not represent the Africans who have served to sustain and promote the imaginary of the mild customs of the Portuguese. Therefore it seems to me that she makes some Portuguese people uncomfortable not “only” because she is a woman of African origin, nor “only” because she is a Black woman and occupies a prominent place in Portuguese society. She makes people uncomfortable because she is all this and is part of a generation of Afro-descendent people who refuse to be, as Homi Bhabha puts it, “[…] almost the same but not quite […] Almost the same but not white”9. This is a generation of Portuguese and Europeans of African origin who demand their rights, and struggle to secure them. They distance themselves, therefore, from an image of exploited, assimilated, inaudible, alienated Africans resigned to subalternity. The visit of Lilian Thuram, therefore, could hardly be timely. It allows us to reflect, among other questions, on this subject in particular. It also allows us to consider what other forms racism may take in Portugal in an international moment which favours the resurgence of racist and xenophobic discrimination.

MEMOIRS is funded by the European Research Council (ERC) under the European Union’s Horizon 2020 research and innovation programme (no. 648624) and is hosted at the Centre for Social Studies (CES), University of Coimbra.

Fátima da Cruz Rodrigues is a researcher on the project MEMOIRS – Children of Empire and European Post-memories (ERC Consolidator Grant, nº 648624) at the Centre for Social Studies at the University of Coimbra.