en
News
Anti-Capitalism
As the Amazon burns, we call on Harvard to cease its investment in farmland
farmlandgrab.org

As the Amazon burns, we call on Harvard to cease its investment in farmland 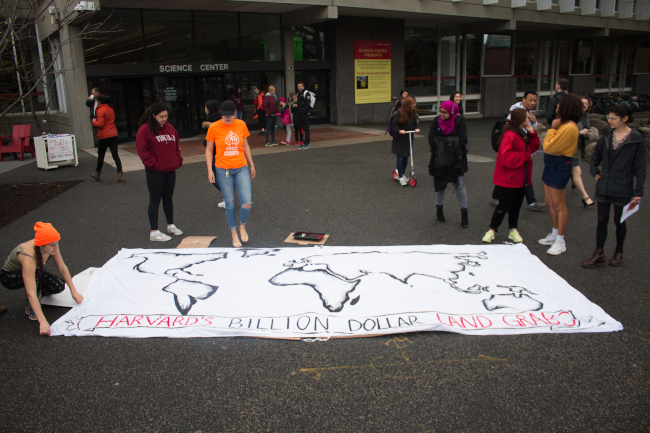 We are devastated by the wildfires currently engulfing the Brazilian Amazon rainforest. Environmental recklessness by Brazilian President Jair Bolsonaro, coupled with the growth of large-scale Brazilian agribusiness, continue to cause the mass deforestation in Brazil. This year, the practice of using fire to clear land for industrial use has left nearly 75,000 fires burning relentlessly through the rainforest.

The Amazon rainforest is home to nearly a million indigenous people, and many more millions of species of plant and animal life. It is also a global carbon sink and one of the Earth’s last natural defenses against climate change, estimated to produce 20% of the world’s oxygen. The destruction of the rainforest is an international crisis, and Harvard is implicated.

Agribusiness practices cause fires in the Amazon, such as this one in 2014 (NASA). This year, fires are burning at record rates . Many analysts have linked the outspoken rhetoric of pro-deforestation president Boslonaro to the increase in fires and deforestation.
For over a decade, Harvard has been investing hundreds of millions of dollars into Brazilian agribusiness. Since 2007, Harvard has acquired 850,000 hectares of farmland internationally, some of it through the creation of falsified land claims by large-scale agribusinesses. This appropriation of land is both a health and environmental risk and an example of land theft on an enormous scale; it has caused the pollution of local water supplies and poisoning of indigenous territories in Brazil’s bio-diverse Cerrado region.

“Investment in Brazilian agribusiness fuels the deforestation of the Amazon rainforest and exacerbates the global climate catastrophe. Harvard is ignoring its responsibility of environmental stewardship and once again choosing profit over the health and well-being of people and the planet.”

As with its fossil fuel industry investments, Harvard Management Company fails to be transparent about its farmland holdings. Until recently, we knew of about 300,000 hectares of land that Harvard has purchased in the Brazilian Cerrado. Recent investigations by GRAIN and Rede Social de Justiça e Direitos Humanos have boosted that figure to 423,000 hectares.

This type of investment in Brazilian agribusiness fuels the deforestation of the Amazon rainforest and exacerbates the global climate catastrophe. Harvard is ignoring its responsibility of environmental stewardship and once again choosing profit over the health and well-being of people and the planet. Divest Harvard stands in solidarity with the indigenous communities impacted by the wildfires in the Brazilian rainforest, as well as climate refugees, globally, who are displaced by climate change.

Divest Harvard continues to demand that Harvard University divest from its farmland holdings, endorsing the call put forth by GRAIN that the University’s endowment “[Cease] all its investments in farmland; Take immediate measures to resolve all land conflicts associated with its current land holdings, and; Ensure that affected communities are adequately compensated for damages.” And we will continue to demand that Harvard divest from the fossil fuel industry, the very source of this sweeping climate destruction.