en
Reflection
Original
Anti-Capitalism
Anti-Colonialism
Anti-Heteropatriarchy
These girls are ours: constructing the colour of the nation over the bodies of murdered girls in Italy
AN Original - DeOthering & Migrating Rights
By Gaia Giuliani

This article is part of a serial by the DeOthering project research team, monthly published in Alice News and also part of the serial “Migrating Rights” aimed at celebrating the 70th Anniversary of the Universal Declaration of Human Rights. These contributions are elaborated under the coordination of the Inter-Thematic group on Migration (ITM) of the Centre for Social Studies of the University of Coimbra.

This essay represents an extract of a major article co-written by myself, Júlia Garraio and Sofia José Santos and to be published by the academic journal Socioscapes in 2019. The co-written article contains a reflection on femonationalism in the discourses of Italian and German extreme-right’s online social media in relation to some important cases of sexual assault, rape and murder of young (national and white) girls by refugees and migrants. The present essay only focus on the Italian case. Based on a survey on facebook pages of major far-right parties and movements in Italy, it tries to connect what I have called ‘figures of race’ drawing from Italian and transnational colonial and national archives, to visual and written narratives and comments that build today on social media what I have called elsewhere the Italian “colour of the nation”. 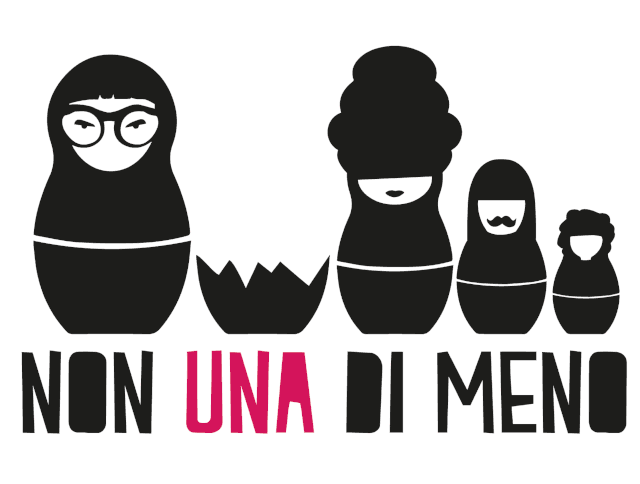 In the context of an increasing moral panic towards the alleged unruly invasion of migrants and asylum seekers in Italy and its consequences in terms of the so-called violation of the Italian (white) ‘imagined community’ symbolic and physical body, special attention has been payed to sex crimes perpetrated by migrant men, which have been given meaning connected to specific gendered and racialized idea of the nation.

Far from being a construction elaborated only by extreme-right movements and parties, the idea of male migrants and refugees as hypersexualized and sexually repressed and aggressive potential criminals is shared by a large array of political formations and public opinion. Traditional and digital media have contributed decidedly to this construction profiting from the fear of invasion that is structuring the Italian public opinion since the 2000s. This construction draws from a very well sedimented colonial archive that has not been deconstructed after the end of national and international colonial experiences and that has been then revitalised by discourses on terrorism, loss of identity and civic conquests, and national security.

Figures of race coming from the colonial archive and referring to black and brown bodies are accompanied here by other figures from the national archive depicting the internal abject (specifically the Roma man) as a natural-born rapist. Here I am referring to the rape and murder of Renata Reggiani occurred in the capital’s outskirts in 2007 by a Roma man with mental disability. The personal and State violence against Roma people and their camps that followed the murder was brutal and indiscriminate. More recently, these figures have been very successfully mobilized by the Italian extreme right movements and parties and inserted within an imaginary of fear that led those same parties to gain substantial consent in local, national and European elections (especially for the Lega) and to the Parliament’s approval of the Decreto Salvini on immigration and asylum-seeking (on the 24 of September 2018), the reform to the Law of Legitimate Defence (approved on the 26th of April 2019) and the application of the Close Ports policy (since June 2018) 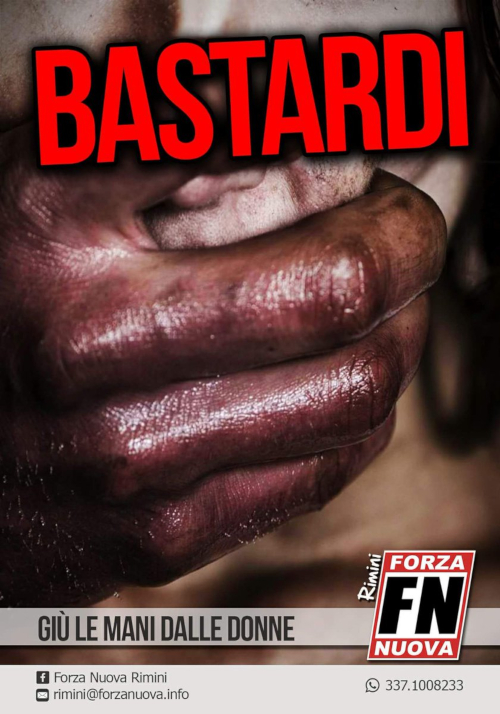 What is at scrutiny here is the online social media (facebook) discourse(s) that  has been articulated on those figures by the main right and extreme right parties in order to understand what kind of imagined ‘community and its enemies’ are widely circulating and structuring Italians’ self-perception.

I have examined social media circulation of posts, images, videos and comments regarding two particular sexual crimes: the rape and murder of Pamela Mastropietro, an 18 years old young woman, by three Nigerian migrants in Macerata, in 2018. Mastropietro had left the rehab clinic near Macerata, where she lived, to buy drugs in the main city, and she was found dead, her body bleached, chopped and put in two bags left by the murders near a provincial way outside Macerata. Desmond Lucky e Lucky Awelima were then considered culprits of rape and Innocent Oseghale was found the culprit of murder and given a life sentence (2019). On February 3rd, the terrible crime, labelled by the right as the result of the deeds of the Nigerian mafia in Italy, led former Lega candidate to the local government, and former Forza Nuova member, Luca Traini, to shoot six black persons from his car (namely: Nigerian Jennifer Otiotio, Festus Omagbon and Gideon Azeke, Ghanian Wilson Kofi, Gambian Omar Fadera and Malian Mahmadou Touré) while shouting ‘Heil Italy!’ (‘Viva l’Italia!’).

The second is the gang rape and murder of Desiree Mariottini, a 16 years old girl in Rome (October 2018) by five men - three Senegalese, a Nigerian and an Italian. The girl had gone to Quartire San Lorenzo in Rome to buy drugs with the help of an Italian black woman (Antonella Fauntleroy) and left in an abandoned building with the three pushers, who then raped and murdered her.

The facebook pages I have considered are those of four parties and self-defined movements of the Italian right and extreme right – Lega, Fratelli d’Italia, Forza Nuova, CasaPound Italia – and the personal page of their leaders, respectively, Matteo Salvini, Giorgia Meloni, Roberto Fiore, Simone di Stefano. These parties and movements have been selected for three reasons. First, their rise in visibility and electoral consent. Although their electoral success may vary as well as their number of party/movement members, all of them have reached a considerable increase of political and electoral local and national consent and/or major visibility in the national traditional media. Second, despite their differences – two of them, Forza Nuova and CasaPound Italia are openly fascist, while Lega and Fratelli d’Italia do not label themselves as such, even though the latter is the offspring of postfascist Movimento Sociale Italiano and then Alleanza Nazionale  – they have a strong and well defined ideological apparatus. Matteo Salvini’s new Lega is an exception: Salvini’s Lega made a radical turn in 2017 when from an autonomist and federalist it became a nationalist and soberanist party, a populist radical right party (like Fratelli d’Italia), which is today the main point of reference for and allied to the neo-fascist right.

From my survey, it clearly appears that there is a strong convergence between the main discourse articulated by Salvini, defining the rape by a refugee or an asylum seeker under humanitarian protection as ‘double’ (against the victim and against the Italian society), and the discourses produced by all the extreme right facebook pages’ posts. Besides this, it represents a leitmotiv shared by very different political forces – from moderate left to extreme right – and it is claimed by a considerable number of facebook members.

As it emerges from the posts and comments analysed, horror and fear against the murders convey moral panic and fury against migrants and refugees in general, portraying them as potential criminals. Fears of invasion are underpinned by ideas of black Otherness that are forged on the base of those ‘figures of race’ that allow a generalization of the depravity of the rapists and murders to include all the incoming male (black) population («everybody out!»). Against the «beasts», controversial figures like those of Mastropietro and Mariottini are reappropriated as innocent martyrs («flowers»), and daughters of the nation. Against the beasts, then, the moral reprobation is twofold, since their crime is against a person and the national ‘family’ to which she belongs. This family is not meant to include Nigerian and Senegalese black migrants, refugees, and humanitarian protection’s seekers, nor Roma, as it was demonstrated by the failed approval in Italian Parliament of the Law of Ius Soli, the rise in anti-gypsy racism and the many appeals made by Salvini to the need to destroy Roma camps together with refugees and migrants’ illegal slums. As it is confirmed by the descriptions of Mastropietro and Mariottini, the colour of the Italian national family is undoubtedly white – if not ultimately whitened by the same racial crime black men have committed.

Gaia Giuliani is a researcher at the Centro de Estudos Sociais (CES), University of Coimbra, where she is the PI of "(De)Othering - Deconstructing Risk and Otherness: hegemonic scripts and counter-narratives on migrants/refugees and 'internal Others' in Portuguese and European mediascapes" (2018-2121): POCI-01-0145-FEDER-029997. In 2005, she received her PhD in History of political ideas from the University of Torino (2005) and in 2017, the title of Associate professor in Political philosophy from the Italian Ministry of Education (ASN). She is also co-founder of InteRGRace – Interdisciplinary Research Group on Race and Racisms (2014). Giuliani is an Italian Critical Whiteness Studies Pioneer, an Anti-racist Feminist Activist and Scholar, and a Transnational De-constructor of Post-colonial (visual) Archives of Monstrosity. Among her publications: the monographs Race, Nation, and Gender in Modern Italy. Intersectional Representations in Visual Culture (Palgrave Macmillan, 2018) {Finalist, Fifth Place Ex Aequo of the Edinburgh Gadda Prize 2019}, Zombie, alieni e mutanti. Le paure dall’11 settembre ai giorni nostri (Le Monnier 2016), and Beyond curiosity. James Mill e la costruzione del governo coloniale britannico in India (Aracne, 2008), the co-authored Bianco e nero. Storia dell'identità razziale degli italiani with dr. Cristina Lombardi-Diop (Le Monnier 2013) {First prize 2014 in the 20th-21st century category by the American Association for Italian Studies}, the edited book Il colore della nazione (Le Monnier/Mondadori Education 2015), and the forthcoming single-authored Environmental Disasters, Migrations and the War on Terror: A Postcolonial Investigation of Cultural Constructions of Monstrosity, Routledge: London, 2020.