A friend had asked– What about gender discrimination in the valley? Can you guarantee that after Kashmiris are given Azaadi, violence against women would stop in the region?” 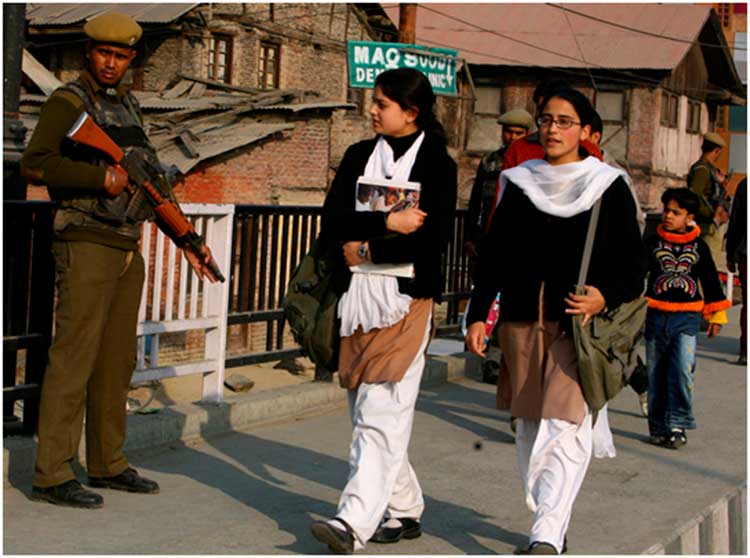 The questions presume that Indians troops are occupying Kashmir because of Kashmiri-driven discrimination against women. Those new in the feminist theory would fall in the trap set by the Indian state and end up justifying the occupation, as did my friend, unknowingly. Then there are people who would flaunt these questions deliberately in order to delegitimise Kashmiri’s struggle towards Freedom.

Throughout the ages, the Bhartiya Janata Party (BJP) had been screaming this reason that Article 35A is discriminatory towards the women. It abrogated the article by giving the same reason. What unfolded afterward is the true colours shown by Indians towards Kashmiri women. The Indian state would be the first one to loot, rape and murder the women in Kashmir. The scenario is evident in what Indians have been cheering-up for recently that they would be able to get (not marry or love) Kashmiri women.

How can an occupier, in a class-war, stand with the occupied? It is also upsetting to see the reactionary approach of the so-called Indian experts on Kashmir reacting to this cry by shouting that Indian men should not mind if Indian women marry Kashmiri men. In order to prove, God knows what, they ended up viewing Kashmir at par with India, which is a blunder in the understanding of power struggle. To put it simply, Kashmir is not New Delhi.

One is domestic violence due to the deeply-rooted patriarchal structure of society worldwide. No Kashmiri denies that. Because they are in a war zone, they are genuinely working to uproot those set of violence.

Second, The Indian state-sponsored killings, rape and torture. This is massive. Precisely to put an end to the violence against women and many others, Kashmiris need to end all kinds of foreign rules on its land, in this case-Indian rule.

The author a JNU alumnus and an ACJ graduate. He can be reached at malikamiralig@gmail.com