The European Maritime Safety Agency in Lisbon is mainly responsible for the safe movement of ships and any kind of vessels, and to some extent for the safety on ships and the control of goods on the sea. It was founded in 2002 after a series of shipping disasters. Plans to fuse or at least organise a close cooperation between the European border agency FRONTEX (located in Warsaw, Poland), the European Fisheries Control Agency (EFCA, located in Vigo, Spain) and EMSA to a united European Coast Guard go back to the 2000s. A crucial step for a closer cooperation was the proposal by the European Commission in December 2015 to widen the mandate of EMSA so as to include border surveillance into its ambit of operations (2015/0313). The final document was approved by the European parliament in September 2016, outlining the cooperation between the three agencies, and the use of drones for the surveillance of the maritime border (Regulation 2016/1625). Follow-up projects for the integration of the three agencies are EUCISE2020 which aims to integrate the databases of the three EU agencies, and the Coast Guard Handbook. 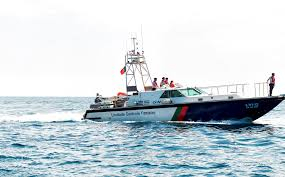 The expansion of the mandate of EMSA came with a bid that the agency launched already during 2016: 76 million Euro were available for two slots, one larger for smaller drones with a volume of 66 million Euro, and a smaller one for bigger drones covering the rest of the financial volume. The upcoming Portuguese space, tech and defence company Tekever, also based in Lisbon, won the larger bid, while the smaller bid was won by a consortium of Portuguese company UA Vision with the Portuguese Air Force, and by Italian defence company Leonardo. Tekever has subsequently built a new production facility in Ponte de Sor in the Alentejo region, where the drones are being produced.

The institutional framework for the use of drones is the following: EU member states can approach Frontex to use the drones which will then submit the request to EMSA, and EMSA subsequently starts an operation which can take a maximum of two months. EMSA itself hires the drones from the different suppliers and does not buy them. The data acquired during the drone flights runs through the data center of EMSA and is shared in real time with Frontex. The first of such operations has started on 25 September 2018 with ground control in Portugal and a focus on border surveillance. A second operation started in early February with ground control in Spain, using the drones and data center of EMSA. In this second operation multiple purposes were integrated: pollution monitoring and border surveillance. At the same time, as a subproject of the EU Copernicus Satelite program, EMSA runs Copernicus Maritime Surveillance since 2019 which also has a multi-focus on border security, maritime safety, fisheries control and environmental issues.

Thus, various surveillance issues run currently together at EMSA in Lisbon, and the Portuguese public has barely taken notice of this. While some member states of the EU have run their national drone programs for a while, the integration at the European level is a crucial step towards a more integrated security infrastructure with joint databases. At the same time, the current context of a complete halt of search and rescue operations within the EU military mission Sophia since the end of March 2019 leaves this mission with a predominant focus on air surveillance: While training of the so-called Lybian coast guard was a part of the Sophia mission since the beginning, it now entails the complete outsourcing of search and rescue operations to the Lybian coast guard. Due to the hap-hazard nature of the Lybian state at this point (and the civil war that started shortly after delegating search and rescue to it) this ‘institution’ more often than not does not respond and is highly dysfunctional. Whilst the installation of the European integrated datasystem EUROSUR in 2015 was legitimated with another shipwreck of hundreds of migrants at sea, surveillance of the border becomes now a predominant concern. While the information gathered could be actually used for search and rescue operations, these are not undertaken for political reasons of a deterrence effect against migrants.

Jörg Nowak has a Ph.D. in Political Sciences from the University of Kassel. He is a Marie Curie Fellow at University of Nottingham, UK.