Colonial land grievances and the politics of redistribution in contemporary Kenya. 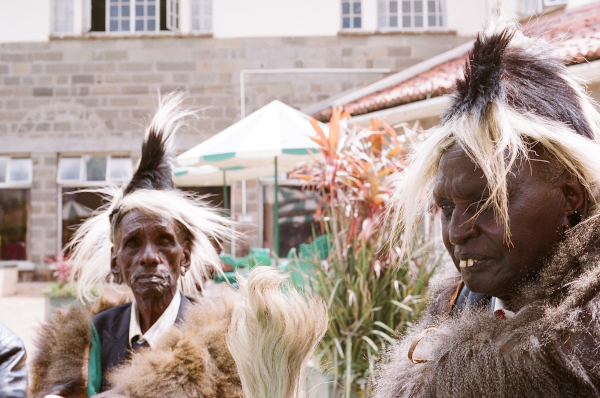 Talai Elders Kibore Cheruiyot Ngasura and King George Kipnegetich discuss their experiences of forced removal with one of the authors at Kericho’s Tea Hotel in 2014. Credit Alex Dyzenhaus

Across Africa’s settler states, the issue of reparations for colonial wrongs has gained traction. In South Africa, Namibia, Kenya, and Zimbabwe, land restitution remains an issue of contention among groups whose displacement resulted from European colonial land grabs that set the foundations for settler agricultural economies.

Among these groups, localized historical narratives of colonial injustice have molded the discursive lens by which citizens frame their past and present grievances. Under new democratic dispensations, institutions that help catalyze redress are now within the reach of citizens who have over the years agitated for compensation. But these bids come in the context of an increasingly commercial agricultural sphere, where fragile economies rely on the secure tenure of profit-maximizing, large, foreign-owned farms. What then happens when moves for reparations threaten such large-scale agricultural ventures, as is the case currently in Kenya?

Kenya’s land inequalities stem from its initial settlement by the British. To make room for white settlers in the late 19th century, the British colonial administration bestowed upon the Crown the power to control and alienate land in the Protectorate. Colonial administrators dispossessed some of Kenya’s most populous communities, including the Kalenjin, Maasai, Kikuyu, and Luhya of much of their high altitude and fertile arable or grazing land, often through violent means. The Kipsigis of the South Rift were especially affected. According to our calculations, in the 1920s the former Kericho District (which was much larger and more multiethnic than it is today), had 1600km2 of land (or 33 percent of its land) declared for white farming only, including large tracts for British tea companies like Brooke Bond and Finlays. When the Talai clan of the Kipsigis resisted, the British jailed and exiled their leaders. Under the 1934 Laibons Removal Act, the British exiled the entire Talai clan—estimated at 750 people—to camps in the far away and inhospitable Gwassi region of Kenya.

Upon Kenya’s independence, the government of Jomo Kenyatta was tasked with the redistribution of most of the individual farms that made up its infamous “European Highlands.” But large agricultural estates like Kericho’s tea estates—now held by multinationals—remained on 999-year leases which they had originally been granted by the colonial government. A majority of the leases remained unaffected post-independence. The estates have now emerged at the forefront of legislation and bids to claim rights and reparations for dispossessed communities. 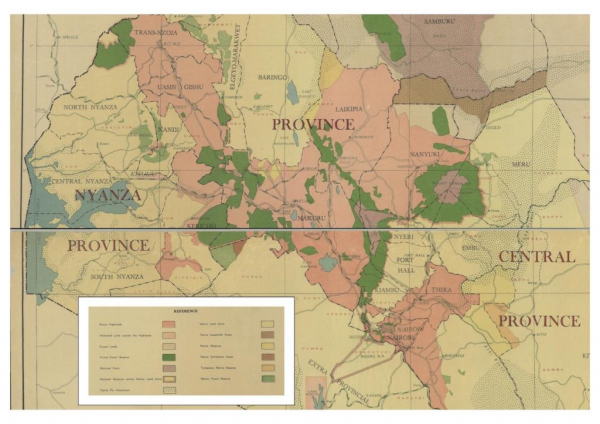 Excerpt from Director of Surveys Map “Kenya-Political and General,” 1951, showing the old Kericho District. The areas in pink were alienated for white settlement only.

The Constitution now provides the requisite institutional infrastructure for redressing of unresolved injustices through the creation of the National Land Commission (NLC), the shortening of the colonial era leases to 99 years and the strengthening of new local governments at the county level. After 2010, Kenya’s institutions were very much in flux, with new actors and a new dispensation that has shaped and informed the strategies adopted in the claims against the colonial government and the tea multinationals before the NLC. By raising their claims in the county assembly in 2014 and filing them at the NLC in 2017 and 2018, the Kipsigis and Talai clans took advantage of these crucial openings. Simultaneously, the fledgling institutions of the NLC and the county government have found initial legitimacy in taking on cases like the tea estate claims of the Kipsigis and its Talai clan. In dealing with these claims, the two institutions, particularly the NLC, reconnect with Kenya’s constitutional history and Kenyans’ long-standing demands for land restitution.

The claims made in the tea estate case rest on a number of axes: dispossession of land by the British, the forced removal of the Talai clan, issues around taxation in the tea estates, and unfair competition in the tea sector between the large multinational estates and smallholder tea farmers in the region. Kenya’s new county governments have provided a platform to push these grievances. Paul Chepkwony won the first election for Kericho’s governor in 2013 on a campaign to restore the tea estates to the community. Resting on his campaign on the tea estates, Chepkwony survived a top-down party attempt to remove him through an impeachment bid in 2014 and then won the 2017 nomination and election.

The tea estates are now a powerful election tool for local politicians to find actionable local grievances. In the neighboring Nandi County, the battle for control of local politics has similarly shifted to the tea estates where the county governor has led locals in “reclaiming” land “grabbed” by tea multinationals. Coverage of the Kericho tea estates bid has been mixed. Some outlets, like AFP and The Guardian, attempt to interview claimants and to accurately represent these complex and historical claims on past and present injustices. Others warn that bids should be wary of harming productive, large farms and the local economy. 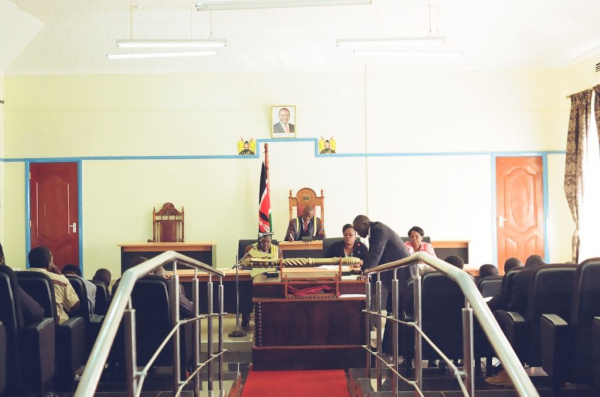 A Member of County Assembly tables a motion in Kericho in 2014. Credit Alex Dyzenhaus.

Still some, like this Economist writer, seem to align themselves with the multinationals, calling the demands of the Kipsigis “preposterous” and “implausible” and implying that they will impede local development and investment or even lead to violence. Much reporting focuses only on the worst possible economic implications if their claims are successful. A Telegraph article leads by comparing the tea estate claims to “Zimbabwe-style land grabs,” emphasizing the possibility of severe tea shortages in Britain. This sentiment rippled through the media, with less reputable sources like the Daily Mail and Sputnik News articles repeating the claim that Zimbabwe-style land grabs are on the agenda.

Such accounts downplay the many times that Chepkwony has committed himself to working within the law to reclaim land and even electing to pursue the claims through the constitutionally established NLC. Through the media, the multinationals have made concerted efforts to spin the narrative and present the claims as a bid for the profit of politicians at the expense of the profitable tea sector. Such selective readings may set the tone for how the NLC responds to these claims.

A similar logic has been advanced by another multi-national, Del Monte Kenya Ltd, whose operations in Kiambu and Muranga counties have been threatened by claims from dispossessed local groups. Del Monte has argued that digging up the past will lead to loss of revenue, local corruption, and renewed conflict. 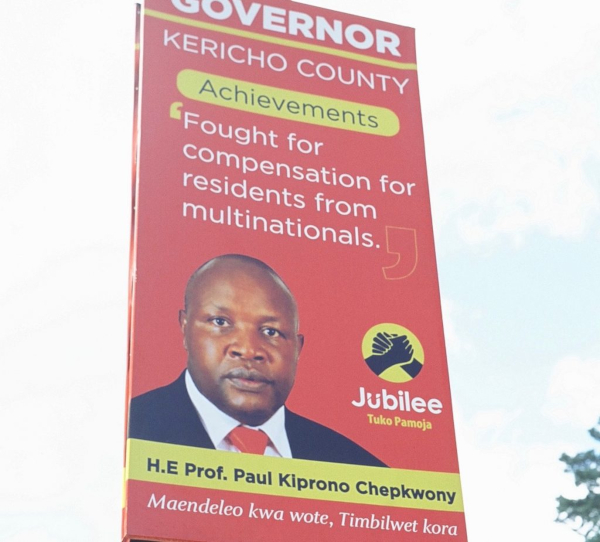 An election poster for Chepkwony reads: Development for all, re-elect Timbelwet. Chepkwony’s nickname Timbelwet comes from the old name of the contemporary Tea Estate his family called home before colonialism. Credit Alex Dyzenhaus.

In Kericho, Chepkwony has undoubtedly used the claims as a concrete election tool to help him win elections, but he has made the issue about more than just regaining unjustly confiscated land or colonial injustice. He has also brought up the issues of increasing government revenue through taxing large multinationals and creating fairer terms of trade for small holders in the region. In an electoral context where many assume that politics is about patronage and corruption, the tea estate-related package of reforms is a clear instance of a popular and multilayered programmatic appeal to voters that targets the needs of farmers and government with a vision for a more equitable future.

In the politics of land in Kenya, there is always a risk that politicians can capture resources, and by allowing the political elite to shape claims and narratives of injustice, communities run the risk of subjecting their claims to political manipulation and opportunism. Equally, politicians can amplify claims by local communities and enable them access for the redress of grievances. This can be done where communities are provided with institutions that facilitate their mobilization and which enable them to effectively articulate their causes.

And while critics may spread fear through claiming “threats of violence” and arguing that these demands are unreasonable, in doing so they willfully turn a blind eye to the fact that the claims are proceeding through clear legal and democratic pathways. In an age where large scale land deals for agricultural and mineral rich land bring investment via dispossession and displacement, international observers should laud and assist efforts by local politicians like Chepkwony and institutions like the NLC to think through these issues carefully, legally, and peacefully.

Land restitution is not about digging up the past at the expense of the present. Instead, it is about investigating the past to determine how to most fairly allocate wealth and profits today. This is true both for the tea estates but also for new deals that would allow large companies to extract minerals and farm agriculturally rich land across Africa and the rest of the world.

Smith Ouma is a Doctoral Researcher at the Centre for Law and Global Justice-Cardiff University and an Advocate of the High Court of Kenya. Website

Alex Dyzenhaus is a PhD Candidate in Government at Cornell University. Website