en
News
Anti-Capitalism
Anti-Colonialism
Brazilian Government dismissal of climate change has an impact on us all
openDemocracy
By Alex McAnarney, Alexandra Montgomery

In Brazil, government speeches that dismiss climate change and the value of nature impact not only public policies but also the environmental balance and therefore the lives of all of us. 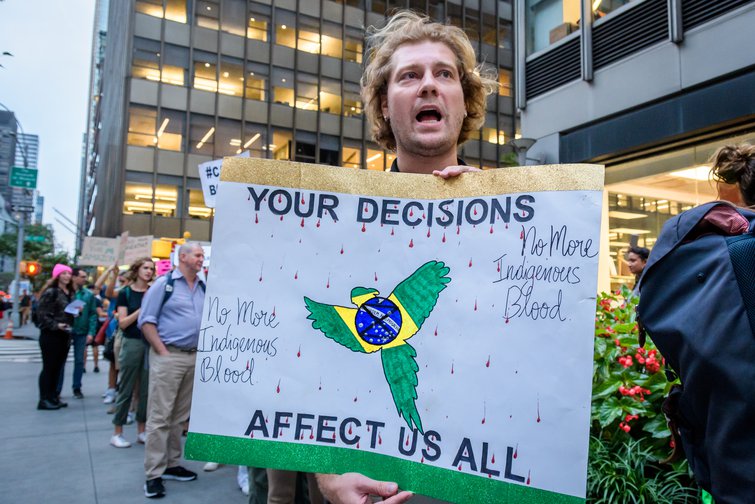 Environmental advocates gathered outside the Mission of Brazil to the United Nations on September 5, 2019 for a rally in Defense of the Amazon. | Erik McGregor/SIPA USA/PA Images

Since June we have witnessed the devastating government agenda that aims to sell and privatize natural resources and indigenous territories throughout Brazil. Resistance to this unbridled development model that devalues the nature and rights of the people who cohabit in harmony with it, have been harassed, violated and murdered. Defenders of the territory of various regions and environmentalists are targeted with slanders, persecutions and threats to their lives.

The international community has seen with amazement what has happened during this year in Brazil regarding the environment. On January 25 in Brumadinho, the dam containing the Vale mining waste was broken, releasing tons of toxic mud over hundreds of people and contaminating the Paraopeba River.

More than 250 people died and there are at least 20 missing. Of equal dimensions, the fires that swept sections of the Amazon during the summer continue to burn, albeit in a slow manner. We know that the majority of August fires do not necessarily correspond to the burning of rainforest, but of areas that have been deforested throughout the year.

In addition to the aforementioned, during the last week of August, traces of crude oil from a spill whose origin is still under investigation were recorded in the waters of the northeast coast of Brazil. The environmental disaster has so far affected 353 localities of 110 municipalities in 9 states of the country and it is estimated that it has affected more than 2880 km making it the largest environmental tragedy in the history of Brazil.

A Navy report estimated that by October 3, two thousand tons of the contaminant material had been removed. However, the impact on the food chain, mangroves, corals and soils will take decades to be mitigated without being sure if some ecosystems can recover. Fishermen, peasants, traditional and ancestral communities in northeastern Brazil have warned about the destruction of their territory and the contamination of their waters at the same time as they denounce the negligence of the State to face the problem and therefore avoid worse environmental impacts.

The state response in all these cases has not been prompt or effective, has been, to say the least, unsatisfactory. In addition to the dismantling of environmental policies, the Brazilian government has been unable to cope with crises and disasters. High authorities of Brazil have speeches and actions that show a weakening of the environmental control framework, while disqualifying the work of environmental organizations and human rights defenders to the point of stigmatizing them and calling them terrorists.

The Brazilian authorities try to minimize impacts and disqualify criticism in a clear intention to avoid any responsibility in the disasters.

Before sending help to the affected populations, initiating actions to clean up the affected areas, search for survivors and start investigations aimed at finding who is responsible for environmental disasters, the Brazilian authorities try to minimize impacts and disqualify criticism in a clear intention to avoid any responsibility in the disaster.

The criticism to Bolsonaro’s government for not reacting quickly to the environmental crisis has been a constant throughout the country while there is worrying about the dismantling of environmental public policies that were in development. For example, the National Environmental Policy Act of 1981, which is considered a milestone, had structured the national environmental system and had enshrined environmental licenses, but this Government wants to reformulate it without structuring or proposing anything in its place.

This is happening under a scenario in which the Ministry of the Environment and their respective monitoring and control bodies have suffered serious budget cuts which greatly reduces their ability to deal with the environmental disaster correctly. The Minister of the Environment, Ricardo Salles was questioned about the spill and he suggested that the Greenpeace organization could be responsible and accused the previous government.

In the face of the spill, the Special Rapporteur on Economic, Social, Cultural and Environmental Rights urged the government to implement control mechanisms and develop relevant investigations to ensure that the spill does not continue and that the responsible entities are sanctioned. In that sense, it is key to continue pointing out that the right to a healthy environment is recognized by various international human rights instruments as in national constitutions and laws.

Such rights include both the right to live in a healthy environment and the right to have the essentials for the development and well-being of people such as access to drinking water, food and uncontaminated environments. The voices that demand environmental rights must continue to express themselves and the mechanisms created to ensure that they can rise, remain vigilant.

While this oil spill is emerging as the third environmental tragedy of great proportions and impact on the world's natural balance during the presidency of Jair Bolsonaro, the voice of those facing the task of preserving the environment in Brazil and the Americas are decimating, the most recent loss being that of the indigenous defender Paulo Paulino Guajajara, killed by “illegal loggers”. In that sense, the destruction of nature and the restriction of the right to protect it are intimately and tragically linked.

Unfortunately in Brazil, government speeches that dismiss climate change and the value of nature impact not only public policies and legislative agendas but also the environmental balance and therefore the lives of all of us, even those who do not live in that country.