This article is part of the Alice Comments series authored by the Epistemologies of the South Research Programme team, and published on a weekly basis.

While the world witnesses a widespread uprising against racism, the role of memory and its public representation have come to the centre of the dispute. The homicide of George Floyd by a police officer in the USA has instigated protests by the Black Lives Matter (BLM) anti-racist movement especially in the global North. Political elites and the media have been divided on their commenting on the movement: while extreme-right (and some right wing) leaders negate that racism exists, leftist leaders tend to superficially support the anti-racist movement but they rarely engage in racism eradication. This is done by using a moralising approach that avoids questioning the historical roots of racism, the dynamics that support its endurance, and white privilege. Superficial anti-racism reinforces the positions of those who negate the existence of racism as can be seen in present day contested interventions of heritage sites.

In Europe and the USA, people are protesting against the violence of a social hierarchy that is based upon skin colour and thus they are promoting and seeking a truer social justice. As a part of this struggle, they occupy streets and squares that are populated with monuments, buildings and other heritage sites that celebrate the societies and the people that have historically created this race-based social order. As history stories in textbooks endorse the narrative that economic, political and cultural expansion occurred under colonialism, so too does the heritage landscape. The symbolism of the public space in former colonial hubs reproduce the narrative of domination in which the creation of race, racism and its institutionalisation is framed within the “democratic” narrative. This is due to the fact that colonialism and modern day democracy are contemporary creations of the same Eurocentric minds. Colonialism, slavery, domination, and oppression are historicized and locked in the past and their relation with the supposedly democratic “development” of western societies remains largely unquestioned. Historical contradictions are morally resolved with the “the spirit of the time” that justifies not applying to those people and facts the social and moral perspectives we have “developed” today. With this approach the “positive” part of history dominates the narrative, while the “negative” part becomes indisputable in its substance. This historical dualism shields a truer understanding of the root causes of today’s racism.

Political and media elites focus on the moral attitude of people and not on the stratified social and political order. They too easily portray those looking at the root causes as irrational extremists. This is demonstrated by their opting to use of the word “vandalism” to describe the insurgent removal of the statute of Edward Colston in Bristol – the first of a series of heritage interventions that has been unfolding in recent days. In such a view these are attempts to erase history due to the fact that perpetrators are unable to read historical facts in their context. As van Dijk highlighted, “by marginalizing the anti-racist voice the press also fails to meet its own ideological criteria of balance: serious opposition to the elite-defined ethnic consensus is generally censored” (p.251).

Media in the USA, Belgium and Portugal describe interventions with spry or fire as outlaw vandalism, similarly to the descriptions used by politicians in the UK and elsewhere. Winston Churchill in London, Leopold II in Belgium, and Padre Antonio Vieira in Lisbon are some of the characters that are being contested these days. Media reports propagate moral condemnation thereby defending the position that history shall not be erased. As for Colton’s statue, thick and thin whitewashing history supporters argue that these removals are perpetrated by “unauthorised” mobs with a “disgraceful acts”. They forget that radical social change, as did the French revolution, entails the assertive replacement of symbols of oppression with symbols of freedom. The construction of the Colston statute and those of many other colonial entrepreneurs occurred without the authorisation of the tens of thousands of people who were enslaved by these colonialist – or of those that died in during the process.

By focusing on the method used by activists in their interventions and stressing the irrationality of the collective initiative, elite and the media attempt to neutralise the inherent emotional character of influential democratic changes. They protect white privilege symbolised in the heritage landscape and disqualify the anti-racist struggle. This is evident in relation to the “controversy” of the statue of Father António Vieira – a Portuguese missionary in Brazil in the 17th century. Narrated in popular culture as a prominent figure who took a stand against the slavery of indigenous peoples, the graffiti “decolonizes” written on his statue in the past has caused a violent reaction from Portuguese elites and the media. In fact, although hidden and silenced within popular culture, the missionary’s life was also marked by the defence of the enslavement of blacks. In the anti-racist struggle, the inscription “decolonize” should lead Portuguese society to question its long slave and colonial history. Instead, it has served elites to glorify the “positive” historical past and to remain unable to recognise the (“negative”) effects that this hegemonic narrative has on the black Portuguese population.

Márcia Chuva maintains that activists’ interventions are acts of postcolonial activism that are echoing the unexpressed memories in public symbols and in school textbooks. Chuva insists that heritage narratives relate to the present and not to the past, and that it is more important to support human life and peoples’ lives than it is to protect heritage pieces. Protestors do not negate the value of history. This is as they demand the democratisation of historical narratives so that they reconsider their roots and account for difficult legacies. Bansky’s proposal to create a slavery memorial with Colston’s statute being torn down by protestors is an alternative to simply removing the statue as it would be a reinstatement – or reframing – of historical facts incorporating the colonial and postcolonial narrative at the same time. 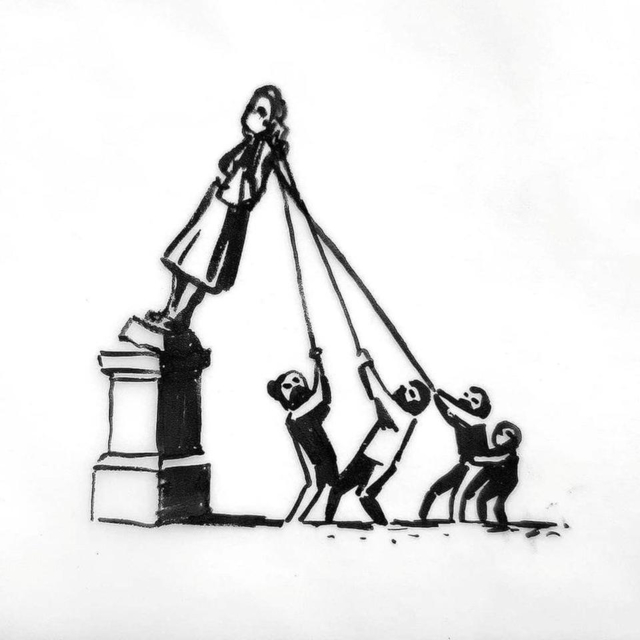 Banksy has offered his own suggestion for what could replace the toppled statue of Edward Colston in Bristol - and it includes putting it partially back up to reflect what recently happened. (Image credit: Banksy)

The controversial Colston statute has been disputed for a long time and many requests for its removal have been repressed. The installation of the statue 170 years after his death is connected to the political aim to reinforce paternalism in Bristol. The statute is paradigmatic because not only did “Colston do some good things with the money he made doing bad things”, but his story exemplifies the inherent co-habitation of the oppression of the blacks (target of the “bad things”) and the privilege of the whites (receivers of the “good things”). The taking of black freedom, rights and lives to support white wellbeing is the basic function of institutional racism – a system both of oppression and privilege documented by the assassination of Stephen Lawrence in London in 1993.

Those engaged against institutional racism should logically agree that for the better expression of their dissatisfaction, colonial heritage sites are contradictions if they do not account for the historical controversies. Instead of focusing on a few symbolic act of removal the debate should engage with the wider need to rethink the heritage landscape through a critical intercultural dialogue.

After interventions towards statues of Leopold II in Belgium, Antwerp authorities have decided to “remove” one of his statues, and authorities in Brussels, London and elsewhere are following suite. Antwerp´s Leopold statute will most probably remain “protected” in a museum, but even its defensive removal creates an important precedence. Petitions with tens of thousands of signatures were collected to remove the Colston and Leopold statutes, and wider scope initiative exists. Civil society’s bottom-up engagement is fundamental as Bristol’s mayor Marvin Rees has witnessed how complicated it is to get the momentum and political power to remove symbols of oppression, even for a black Mayor outraged by them.

The protest of the Black Lives Matter movement reinforces the importance to undo the crystallization of history in the struggle for social justice against institutional racism. Pluralizing heritage narratives is a step closer to listening to the echoes of silenced memories that are re-emerging with vigor – the voice of the oppressed – something to be pursued by white and black people together.

Cristiano Gianolla is researcher at the Centre for Social Studies (CES) of the University of Coimbra and coordinates the PhD course on Democratic Theories and Institutions, the MA course on Critical Intercultural Dialogue (both FEUC) and the virtual course on the Challenges to Democracy in the XXI Century (CLACSO). His research interests centre on populism, emotion, narrative, political parties, social movements, memory and heritage processes, and critical intercultural dialogue. He integrates the research team of the ECHOES project (H2020, 2018-2021).

Pedro Sousa de Almeida holds a P.hD by the University of Coimbra (2019),institution where he also took his degree in Anthropology (2001). He holds a Master´s degree in Sociology by Instituto Superior Miguel Torga (2006), from Coimbra, where he was a teacher between 2002 and 2010. From the idea that football is a uniquely favourable field for studying social reality, his main research interests have centred on the relations between football, race, racism and national identity. Pedro was a researcher, in the "COMBAT - Combating racism in Portugal: an analysis of public policies and anti-discrimination law" (2016-2020), coordinated by Silvia Maeso and funded by the Portuguese Foundation for Science and Technology.